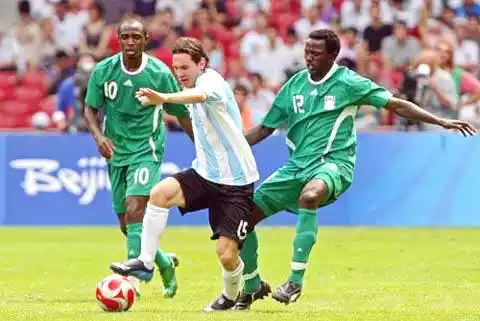 Mercurial Lionel Messi has pointed out a major problem the senior national team of Nigeria has in terms of how they approach games.

Messi who is expected to line up for Argentina when they take on Nigeria in one of the group D games of the World Cup 2018 in Russia scored twice, the last time Nigeria faced Argentina at the World Cup, which was at the 2014 edition in Brazil.

Grouped alongside Nigeria, Croatia and Iceland, Messi was asked in an interview with FIFA online to analyse the strength and weakness of the team in the same group as his country Argentina.

Speaking on the Super Eagles, Messi said ” One day they score four goals, the next one, they leave plenty of space for you to do anything “, he said during the interview.

His views on Iceland was a lot better than his thoughts about Nigeria as he rates them as an organised team, who are sure going to be tough despite the fact that they will be making their debut at the World Cup.

” Might seem easy, but they (Iceland) are tough and we’ll organised “, Messi said before he gave his analysis on Croatia by saying ” They give you more room to play but they have great players”.

His analysis of the weakness of the Nigerian team will no doubt give the technical crew of the Super Eagles, a hint of how to set their team when both sides meet at on the 26th of June in the final round of group games at the Russia World Cup 2018.