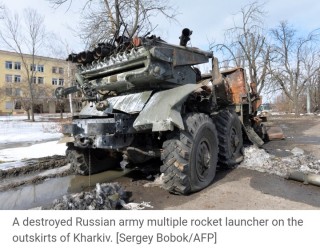 Local officials say at least 500 people have been killed and 600 buildings destroyed since Russia launched its invasion.

People walk past a school damaged by shelling in Kharkiv. [Oleksandr Lapshyn/Reuters]

At least 500 people have been killed in the city of Kharkiv since Russia launched its invasion of Ukraine on February 24, the regional emergency service has said.

Ukraine’s second-largest city, located in the country’s northeast, has been subjected to relentless bombardment by Russian forces for weeks. Mayor Ihor Terekhov said in a televised interview on Tuesday that more than 600 buildings have been destroyed since the start of Russia’s invasion.

“Schools, nurseries, hospitals, clinics have been destroyed. The Russian army is constantly shelling [us] from the ground and the air,” he said.

A firefighter battles the flames at a site set alight by shelling in Kharkiv. [Oleksandr Lapshyn/Reuters]

A building damaged by Russian shelling in the centre of Kharkiv. [Anadolu]

Ukraine’s armed forces said Russian troops had not yet succeeded in surrounding the major city, agreeing with Western analysts that they are short of supplies and ammunition

Russian forces will likely struggle to bypass the city while resistance continues, the Institute for the Study of War think-tank has said.

First responders work in a building that was struck by Russian shelling. [Wolfgang Schwan/Anadolu]

A volunteer of the Ukrainian Territorial Defense Forces helps a woman to cross the street in Kharkiv. [Andrew Marienko/AP Photo