Russian Invasion: Ukraine Says Over 2,000 Civilians Killed In One Week

Russian Invasion: Ukraine Says Over 2,000 Civilians Killed In One Week 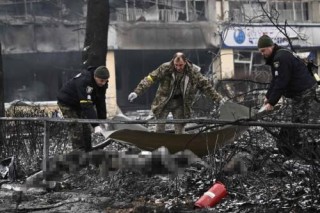 More than 2,000 Ukrainian civilians have been killed in seven days since Russia launched a war, the State Emergency Service of Ukraine said on Wednesday.

“Russia destroyed transportation infrastructure, houses, hospitals and kindergartens,” the service said in a statement, according to AA. “During this time, more than 2,000 Ukrainians died, excluding our defenders.”

It added that the service managed to save more than 150 people on Wednesday, put out more than 400 fires that broke out after enemy shelling, and evacuated more than 500 people. Pyrotechnicians also neutralised 416 explosive devices.

Ten rescuers were killed and 13 were injured in the process, the statement said.

The announcement came ahead of the expected second round of Russia-Ukraine peace talks. The first session was held on Monday.

Russia’s war on Ukraine, which began on February 24, has met international outrage with the EU, US and UK, among others, implementing tough financial sanctions on Moscow.

Many countries are also supplying Ukraine with weapons, have shut their airspace for Russian airlines, and banned Russian state-run media.