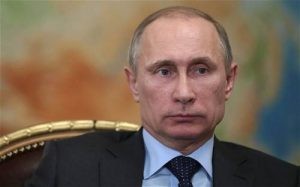 “Vladimir Putin, the Russian President, has laid out his conditions to stop the ongoing military occupation of Ukraine.

A peace talk was held between Moscow and Kyiv in the Belarusian borders on Monday, being the first meeting since last Thursday when the war broke out.

The meeting ended with both sides merely agreeing to hold a second round of negotiations “soon.”

However, the Russian leader was able to pass the message on the only conditions under which he would consider withdrawing his troops from the neighbouring country during a phone conversation with France President, Emmanuel Macron on Monday.

“Putin stressed that a settlement is possible only if Russia’s legitimate security interests are unconditionally taken into account, including the recognition of Russian sovereignty over Crimea, the demilitarisation and denazification of the Ukrainian State and ensuring its neutral status,” CNN quoted a Russian statement via UK medium, PA News agency after the telephone conversation between the two leaders.

The war started on Thursday when President Putin ordered the invasion of Ukraine over some political reasons.

Even as the dialogue was underway on Monday, at least 11 people were killed by Russian attacks in Ukraine’s second largest city of Kharkiv.