According to a report from Inside Edition, close ties to the Kremlin who leak information to them confirmed a chilling action Vladimir Putin took about a month ago. 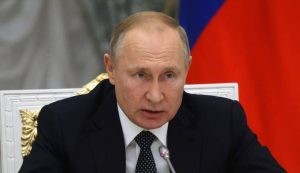 At least 1,000 personal workers of Vladimir Putin have been sacked, as reported by Inside Edition.

Putin sacked them due to fears that he might be poisoned.

The report said the Russian president suddenly started firing his own personal staff following which about 1,000 people lost their jobs.

When we say personal staff, we mean Russian employees who actually serve him his food and tend to him on a regular basis, Marca reports..

It was also reported that Vladimir Putin keeps a specific staff member who always tastes his food before he starts eating. All of this behaviour is very common from dictators or tyrants who are usually afraid for their lives.

Venezuela’s dictator Nicolas Maduro has the same type of behavior that Putin began to display since before the invasion. Texbook dictator behaviour that doesn’t surprise anybody.

It is obvious that Putin is already fearing a possible coup and many assassination attempts from his own people. We know from experience that Vladimir Putin tends to poison his own opponents. But, is this even a possibility for Russians?