Russian Soldiers Are Freezing To Death In Eastern Ukraine 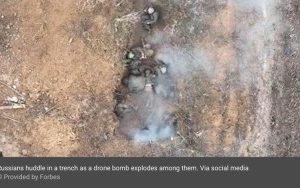 -There is a video link in the story of a Russian soldier with hypothermia struggling to commit suicide that was too brutal for me to finish watching. View at your own peril. Not the Twitter video on the source page, the story with the hyperlink.

The Ukrainian army has deployed some of its best brigades to eastern Ukraine, including the 92nd and 93rd Mechanized Brigades and the 1st Presidential Brigade. But these elite Ukrainian formations might not be the biggest killer of Russian troops in the east. Under-trained, under-supplied and ambivalently led, Russians in the region are freezing to death by the dozen.

Shocking videos that have circulated online in recent weeks tell a tragic story. The videos, shot by the Ukrainian brigades’ hovering drones, depict Russians in the late stages of hypothermia, so cold and sick that they barely react when the drones drop lethal improvised bombs on them.

Thomas Theiner, an ex-soldier who currently is a filmmaker in Kyiv, predicted winter “would kill more Russian soldiers than Ukraine ever could.” He may have been right.

With preparation, sound leadership and reliable logistics, the conditions are survivable. Soldiers bundle up, sleep in roofed, heated trenches with floors, frequently change their wet socks and eat twice as much as they would on warm days. When they get sick, they evacuate to the rear for rest.

The problem, for the Russian army, is that more and more of its troops are untrained draftees. Officers aren’t leading from the front. And Russian logistics are strained by nonstop Ukrainian bombardment. Starving draftees with no gloves or good boots are huddling in shallow, unheated trenches while their officers squat in abandoned houses potentially miles away, unaware or uncaring as their soldiers succumb to the elements.

When you’re wet, hungry and exposed to the nighttime cold, it doesn’t take long for hypothermia to set in. One bad night is enough. Even moderate hypothermia can result in confusion, decreased reflexes and loss of motor skills.

Which explains the drone massacre that’s been playing out lately over contested eastern towns such as Svatove, Pavlivka and Bakhmut. Hypothermic Russian troops aren’t even trying to flee when Ukraine’s bomb-armed quadcopter drones buzz overhead. The soldiers barely flinch when a bomb explodes in their fighting position.

Suicides evidently are on the rise. One especially gut-wrenching video depicts a Russian combatant in scrape outside Bakhmut trying to shoot himself in the chest as a Ukrainian drone watches from directly overhead. The Russian’s ungloved right hand is blue with cold, and he struggles to pull the trigger.

The video feed cuts. When we see the Russian again, he apparently has succeeded in killing himself. He doesn’t move when the drone’s bomb explodes beside him.

It’s hard to say for sure how many Russians have died of the cold. But it’s worth noting that just one Russian marine unit, the 155th Naval Infantry Brigade, reportedly lost as many as 500 killed and 400 wounded in just the last three months fighting around Pavlivka. That’s potentially half the brigade’s original strength.

A nearly one-to-one killed-to-wounded ratio—one to three is normal—speaks to the collapse of Rusisan leadership … and to the cold. Wounded troops, lying exposed to the elements, are dying before anyone bothers to rescue them.

Expect many, many more Russians to freeze to death as the weather gets worse. “Temperatures are forecasted to drop throughout Ukraine over the next week,” the Institute for the Study of War in Washington, D.C. noted on Saturday.