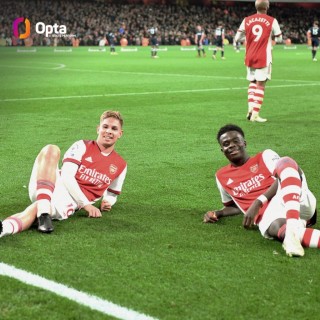 Both Saka and Smith Rowe were on target for Arsenal who defeated Chelsea 4-2 at Stamford Bridge on Wednesday night.

It was their 10th goals for Arsenal this campaign as the Gunners revive their Champions League qualification hopes.

Smith Rowe put Arsenal 2-1 ahead while Saka sealed the win after converting a stoppage time penalty.

And according to football statistics outfit, Smith Rowe and Saka have both scored 10+ goals in the Premier League this season; just the third time two players aged 21 or under have done so for the same team in a campaign (Wayne Bridges and Hary Kewell for Leeds in 99-00, Rooney and Ronaldo for Man Utd in 06-07).

Mikel Arteta’s side have another big game this weekend as they welcome top four rivals Manchester United to the Emirates.