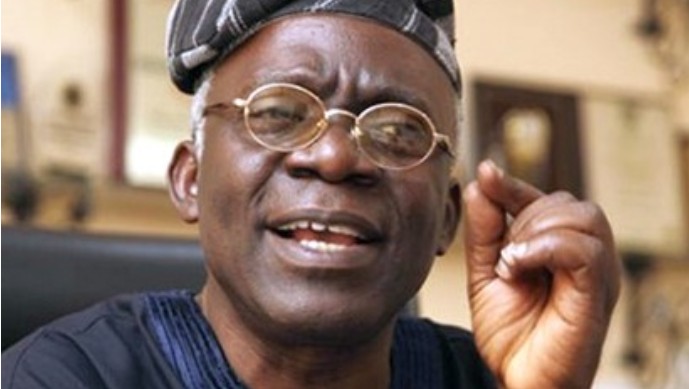 This is even as foremost constitutional lawyer and human rights activist, Chief Mike Ozekhome (SAN), condemned call by National Chairman of APC, Adams Oshiomole, that Senate President, Saraki, should resign as President of the Senate, after defecting from the APC to the PDP.

Falana’s position came barely 24 hours after Tambuwal and 48 hours after Saraki, Ahmed and 23 lawmakers in the state defected from APC to PDP

Falana, who faulted their action on the sideline during unveiling of Nobel laureate, Prof. Wole Soyinka’s new book, entitled ‘Who keeps watch over the watchman,’stressed that as stipulated in the 1999 constitution, there was no crisis in the APC to warrant their defection from the party to PDP.

He said: “1979 and 1999 constitutions have prohibited cross-carpeting on the ground that you are cheating or shortchanging the electorate. And that was stated under section 68 1 (G) of the constitution.

“The only provision is that if your political party is in trouble and is fractionalized, major division, you can cross over, but not a division instigated for the purpose of exiting, no.

Meanwhile, Chief Mike Ozekhome (SAN), has condemned call by Oshiomhole that Saraki should resign as President of the Senate.

Ozekhome in a statement made available to newsmen yesterday, said: “In law, there is no legal or constitutional basis for Dr Bukola Saraki to resign or be removed as President of the Senate and Chairman of National Assembly for defecting from the APC to PDP.”

He further explained that “the first point to make here is that section 68(1) of the 1999 Constitution provides inter alia, that any member of the 109 Senators and 360 members of the House of Representatives who loses his Nigerian citizenship, or is made a minister, or decamps from his political party to another party AUTOMATICALLY loses his seat.


Thank you for visiting us, We hope and long to see more of your visit again… Hope you enjoyed your visit?