See Davido’s Reactions Over Mayorkun First Mansion
Self acclaimed Mayor of Lagos, Mayorkun Adewale, who is signed to Davido’s record label, DMW, is surely at the peak of his music career as he just bought himself a beautiful house.

Mayorkun took to social media to show off his latest achievement, “His first home” – He shared a picture of himself standing in the gorgeous house with the caption; “humble beginnings”, with a “house” emoji. Barely two years of his rise to stardom, the “Eleko” crooner has achieved a lot including the completion of a grand building somewhere in Lagos. Though he did not state in his post if the house was outright purchased or developed.

Then His Boss, Davido took to His Snapchat to react about Mayorkun’s sucess. Davido, in his post, said he is proud to be a part of Mayorkun’s success and he called him a Big boy. 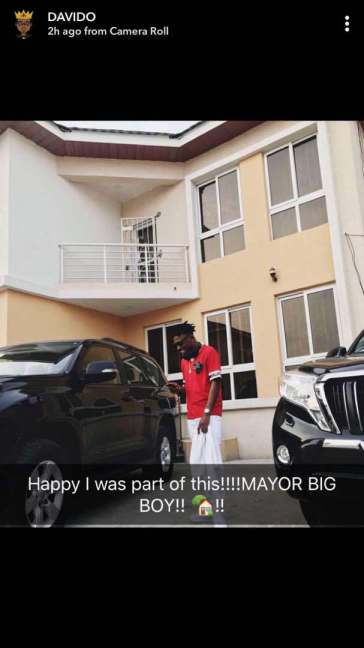 Mayorkun was signed to Davido’s label on March 3, 2016, after the former made a rendition of one of his popular songs that went viral. His debut song Eleko was a hit and since then the artiste has been doing great music.

Davido on the other hand had one of his houses renovated and completed last year. It was a Masterpiece.

Davido is not only a great singer and talented artist but also an entrepreneur. He is known to be one of the top wealthiest artistes in the country. He had so much success in show business that he was able to establish his own music record label. Now his net worth is growing and life is getting even more luxurious. After his 30Billion concert in December 2017, the pop star claimed he made N500Million just for that night and he rounded up the year with the purchase of a brand new Bentley luxurious car, which he just picked up in Atlanta some few weeks back.