See Photos of a Man that was acttacked by Bees for stealing woofer,which forced him to return it to the rightful owner.

A thief was nabbed in Masindi town Uganda after a witch doctor sent bees to smoke him out.

It was amazing to see the man moving like a remote controlled machine back to where he stole the woofer from….
The unidentified man was stung by the insects which perched on is head and chest and forced him to confess. 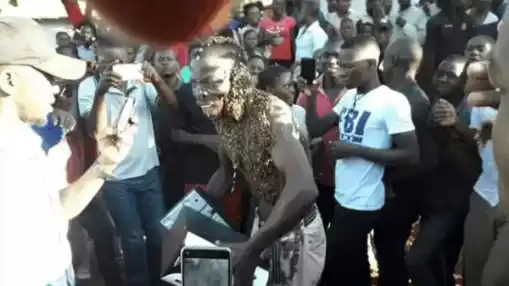 He marched on the streets in pain as he returned the stolen items to its owner.
The proverbial 40 days of thief became reality to a man who stole music systems in the town of Masindi when a swarm of bees attacked him at his hideout.
The unidentified man was forced to return the stolen woofer after the bees attacked him with stings and making a home on his head, neck and almost half of his body.

Carrying the woofer in one hand and trying in vain with the other to chase the insects, the man marched in the streets without a shirt as he returned the stolen items to the owner in the little Ugandan town.
“A guy stole woofers in Masindi town and these bees were sent to arrest him. Someone direct me to the Musawo please,” Facebook user Basudde Sam posted on his page.

1 Comment on See Photos of a Man that was acttacked by Bees for stealing woofer,which forced him to return it to the rightful owner.