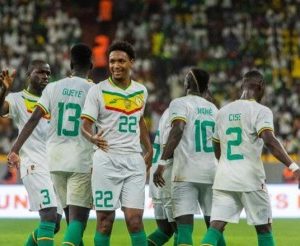 Senegal defender, Abdou Diallo has set a semi-final target for the Lions of Teranga at the 2022 FIFA World Cup in Qatar.

The FIFA World Cup is set to take place between November 20 and December 18 this year.

No African country has gone beyond the quarter-finals stage at the World Cup and the Teranga Lions defender is hoping to see his team break the jinx and better their record at the Mundial.

The Teranga Lions reached the quarter-final at the Korea/Japan 2002 World Cup, losing 1-0 to Turkey at the Nagai Stadium in Osaka, Japan.

Senegal are in good form after defeating Egypt 4-2 on penalties following a 0-0 draw at Olembe Stadium Yaounde, Cameroon to win the 2021 African Cup of Nations (AFCON) on February 6.

In an interview with BBC Sport, Diallo revealed his ambition to reach the last four in the World Cup with Senegal.

“Even though we can’t see the future, you have to be convinced that you definitely can achieve it,” the Paris Saint Germain defender told BBC Sport.

“We also had a glass ceiling in the Nations Cup final and we broke it, so my dream is to break another one. If we manage to do that, I will be the happiest.”

Senegal are in Group A of Qatar 2022 FIFA World Cup alongside Netherlands, Qatar and Ecuador.