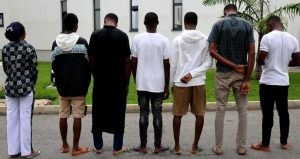 Seven suspected internet fraudsters have been apprehended by Operatives of the Economic and Financial Crimes Commission.

A statement by EFCC Spokesman,  Wilson Uwujaren, said that items recovered from the suspects  included mobile phones and computer devices.

Uwujaren said that the suspects would be arraigned in court as soon as the investigation is concluded..