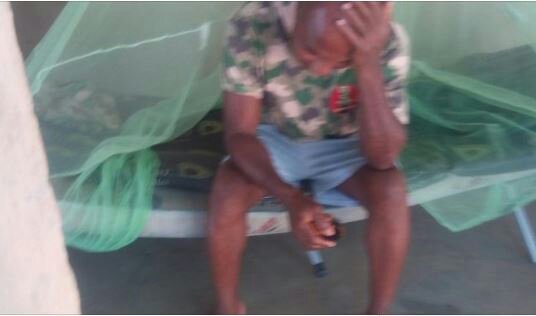 Gandoki, a corporal with the special force unit of the Nigerian army, walks out of a sport betting shop, scans through the ticket in his hands, then nods as his face widens into a smile. The corporal and many other soldiers fighting Boko Haram insurgents in the north-east do not receive their operation allowance regularly. They find means of survival by gambling, using as low as N50 to predict results of games that could—if by chance their predictions hit it right— enrich them with a few thousands of naira.

“For months now, we’ve not been paid our allowance. How would we have survived if not for the small money that we see from this sport betting?” Gandoki asks, smiling his way to a bar close to where his unit is camped. His predictions on matches in European football league have so far won him almost half the amount of allowance owed him by the Nigerian army.

A few bottles of beer and a plate of pepper-soup are enough consolation for this special force soldier who has just a few days left in Maiduguri, Borno state capital, before returning to the frontline, where the fight continues.

A standard soldiers’ footwear is dark green camouflage shoes but some who are fighting Boko Haram walk into battle with open-toe slippers. Soldiers in the trenches would reveal that being ‘poorly kitted’ in the army is an understatement.

“Kitting of soldiers? You are on your own,”Gandoki jeers.  Then, he yells: “We have our special uniforms that we use as special force soldiers. But nowadays, none of us is still that specially kitted.

“Soldiers now use any type of uniform they can afford. We were even once told that part of the money owed us would be used to buy our uniforms. We were also assured of getting camouflage T-shirts, rather, what we were given were Etisalat branded T-shirts. And when the uniforms came, if you get a trouser, you will not get the shirt. If you get camel bag, you will not get knee guard.

“When they bring the uniforms, they share it among themselves at the top. Even in Abuja, you will see officers that did not train with us being kitted with special force uniforms.

“In NAPEX (Nigerian Army Post Exchange), the store where military uniforms are being sold, each goes for about N25,000. But then, how much is an average soldier’s salary? So, that is why we put on anything we have. And we do that even in the war front. Soldiers who don’t have desert boots and can’t buy canvass, wear slippers.”

Many of the soldiers have not been given fragmental jackets (bullet-resistant vests) since they got drafted into the war theatre. In the bushes where the action takes place, the soldiers don’t expect a luxurious living. They simply want the authorities to provide them with camp beds.

“We buy the beds and tents with our money. Some of us went to Mali in 2013 for an operation where we were fully kitted. When we came back, and redeployed to operation Lafiya Dole, they collected the bed and fragmented jackets from us and were sent to the bush in Bama, at the time the insurgency was very hot. It was hell.”

“We go for parameter patrol without night vision goggles. We go in blindly, and because we are not equipped with these night vision goggles, Boko Haram will be approaching your camp in the night and you will not see them until they are already closer, firing at you.”

‘NOTHING SPECIAL ABOUT SPECIAL FORCES SOLDIERS’ 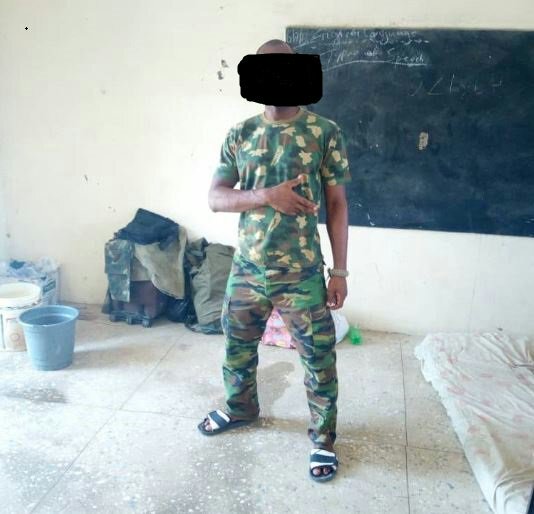 Should soldiers whose unit bears the name special not be given preferential treatment?

Special forces are military units trained to carry out special operations, and in Nigeria, hundreds of soldiers from various divisions and battalions have been specially trained and drafted into this unit where the task is to fight Boko Haram insurgents.

“Anything they call special is supposed to be treated special because of the training you undergo, but there is nothing special in this operation we’ve been in here,” Gandoki says, his chin lowering from disappointment.

“We will be advancing to face the enemies, and all we are given to eat for days is popcorn and biscuits.”

He was a young soldier in one of the divisions in the south-east when a signal was sent to the armed forces; army, air force, navy and the police regarding the assemblage of a select few for special training.

“We were nominated from across battalions, and were assembled at the military cantonment in Jaji,” he said, adding that on arrival, they were told to see themselves as lucky to have been picked for the training. The soldiers saw it a privilege but none of them knew they would end up squaring up against Boko Haram in the north-east.

“The training was in Russia, and we were there for four months. We were supposed to stay up to six months, but there was pressure on us to return and fight.”

‘WE BEGGED OUR ENEMY FOR WATER’ 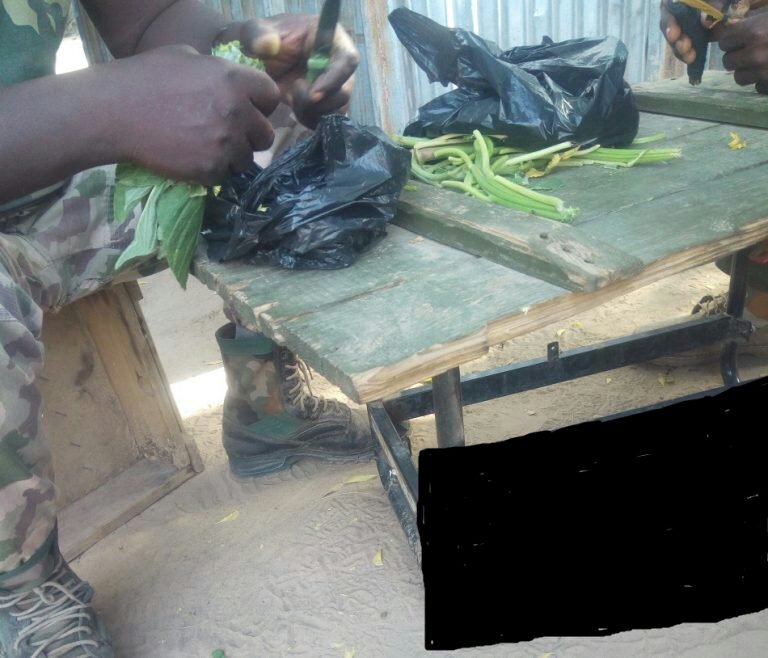 Soldiers preparing vegetable ahead of cooking

Before departing for Russia, these would-be special force soldiers were given 30% of their training allowance, and assured of getting the remaining 70% upon their return. Sadly, the soldiers’ hopes were dashed as it never came forth.

They never got what they were promised.

Gandoki is in the first batch of the specially trained soldiers deployed to the operation in the north-east, and their first assignment, upon return in 2014, was to engage Boko Haram insurgents in Sambisa forest.

“We were about 200, advancing into Sambisa, and the first problem started when we weren’t given food or money to feed,” he says as his voice dropped again.

“On this first assignment to the bush, some died and, luckily, some of us returned alive. If you see the kind of food they would eventually give us, you will weep for us. There was a time we were begging our enemy for water, because we were going to die of thirst. The military helicopter, we were told, would bring water but wouldn’t be able to land because where we are is not safe for it. And, I would ask, what about us on the ground here?”

The insurgents may have killed quite a number of soldiers, but these fighters say lack of food and water should also be held responsible for soldiers’ death.