The 37-year–old has played for the Leone Stars since 2008 after becoming a professional in the Major League Soccer two years earlier. 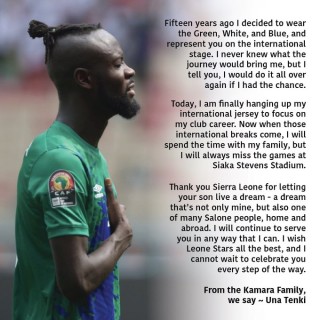 The striker scored the only goal in a qualifying win over Benin that lifted Sierra Leone to the 2021 African Cup of Nations, their first appearance in the tournament since 1996.

The Montreal Impact star appeared in all of his country’s three group games at the AFCON finals in Cameroon.

Kamara scored seven goals in 36 appearances for the West Africans.