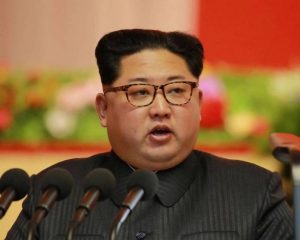 North Korean leader Kim Jong-Un could be laying a trap for the US and the South with his apparent olive branches towards Seoul, analysts say, warning that Pyongyang’s ultimate goal is to divide their 70-year alliance.

After months of high tensions over the North’s weapons ambitions — last year it launched missiles capable of reaching the US mainland and carried out its most powerful nuclear test to date, proclaiming it a hydrogen bomb — events have moved quickly in recent days.

In his New Year speech, Kim said the country had completed its nuclear deterrent — Pyongyang says it needs to defend itself against a US invasions — and he had a “nuclear button on my desk”.

At the same time he made overtures to Seoul, saying Pyongyang could send athletes to the Winter Olympics the South is hosting next month and expressing a willingness to discuss the issue.

It was a 180-degree turnaround for the North, which has long ignored South Korean President Moon Jae-In’s efforts to engage it.

Since then the two sides have reopened a communications hotline and agreed to talks next week at Panmunjom, in the Demilitarized Zone that divides the peninsula, while Washington has agreed to a request by Seoul to postpone joint military drills that always infuriate Pyongyang until after the Olympics and Paralympics.

Unusually, Pyongyang — whose propaganda can be colourfully aggressive, sometimes threatening to turn Seoul into a “sea of fire” — has referred to Moon as “president”, and asserted Kim’s desire for improved North-South relations.

Sceptics say Kim is trying to drive a wedge between the allies — the US has 28,500 troops stationed in the South to defend it from the North — at a time when the international community should remain united in putting pressure and sanctions on the North over its weapons programmes.

Moon has long advocated engagement with the North to bring it to the negotiating table, while the US has insisted that it first take concrete steps towards disarmament.

“It’s quite obvious that Kim’s New Year speech is aimed at driving a wedge between the US and the South,” Handong University political science professor Park Won-Gon told AFP.

“What is important for the South is not to play into the hands of the North.”