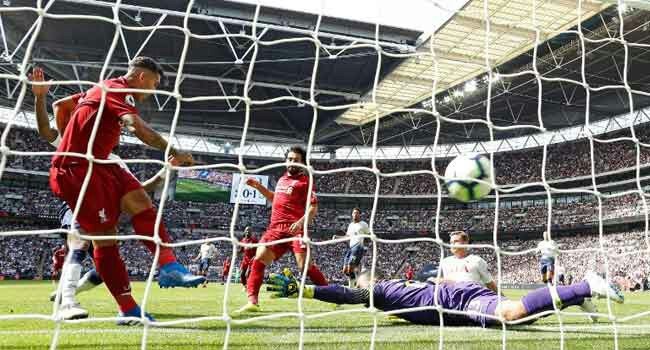 Liverpool extended their perfect start to the season as goals from Georginio Wijnaldum and Roberto Firmino ensured the Premier League leaders punished woeful Tottenham with a 2-1 win on Saturday.

Jurgen Klopp’s side avenged last season’s 4-1 thrashing at Tottenham with a large helping hand from their error-prone hosts.

Wijnaldum opened the scoring late in the first half at Wembley after a mistake from Tottenham goalkeeper Michel Vorm.

Firmino wrapped up Liverpool’s fifth successive win soon after the interval when the Brazil forward tapped in after more sloppy defending and another Vorm misjudgement.

Erik Lamela got one back for Tottenham in stoppage-time, but it was too late to rescue an undeserved draw.

This mature display was a real statement of intent by Liverpool, who have made their best start since 1990-91 as they chase a first English title since 1989-90.

Not for the first time this season, the Reds triumphed through hard work, a superbly drilled defence and opportunistic finishing rather than replicating the kind of swaggering play that took them to the Champions League final last season.

But Klopp, a winner at Wembley for the first time, won’t be complaining after securing a rare away victory at one of their top six rivals, proving they are likely to be the biggest threat to champions Manchester City.

For Tottenham, this was a dispiriting second successive defeat that served as a major blow to their own title ambitions.

Mauricio Pochettino had accused Tottenham of treating their 2-1 loss at Watford like a “testimonial”.

Challenging his players to show a killer instinct, Pochettino was expecting a fired-up response.

But instead Tottenham almost fell behind after less than 60 seconds.

When James Milner swung a cross into the Tottenham penalty area, Firmino and Sadio Mane were both allowed to make unchecked runs by Pochettino’s sleepy defence.

Firmino, in an onside position, cleverly flicked his shot across Vorm and towards the far corner, only for Mane to be ruled offside as he tried to get the last touch.

Tottenham’s lethargy wasn’t restricted to their defenders and England midfielder Eric Dier was fortunate to get away with a terrible backpass that gifted a chance to Mohamed Salah.

Salah sprinted through on goal, but he delayed too long, allowing Jan Vertonghen to pressure him into a shot that was too close to Vorm.