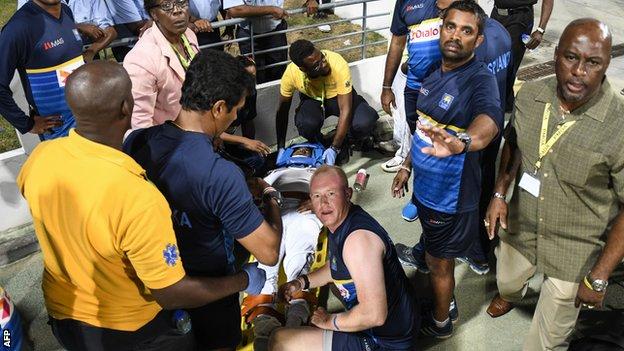 Sri Lanka beat West Indies by four wickets in Barbados, winning a low-scoring third and final Test early on the fourth day to draw the series 1-1.

They are the first Asian team to win a Test at Bridgetown’s Kensington Oval.

Chasing 144, Sri Lanka resumed on 81-5 and lost Kusal Mendis in the first over, bringing in Kusal Perera – who had been injured in a collision with an advertising board while fielding.

He and namesake Dilruwan Perera added an unbroken 63 to see Sri Lanka home.

It was harsh on West Indies captain Jason Holder, who took 5-41 on his home ground – giving him match figures of 9-60 – after scoring 74 in the Windies’ first innings, the highest individual score in the day-night match.

In total, only 595 runs were scored across all four innings, with Holder and keeper Shane Dowrich (71), who added 115 in the hosts’ first-innings total of 204, the only batsmen to pass 50.

The series was overshadowed by a ball-tampering row which broke out during the drawn second Test in St Lucia and earned Sri Lanka captain Dinesh Chandimal a one-match suspension, ruling him out of the Barbados Test and leaving his deputy Suranga Lakmal in charge.

Chandimal, coach Chandika Hathurusinghe and manager Asanka Gurusinha have admitted a “serious law breach” after the team delayed play during the second Test while the row brewed – and the trio are set for an International Cricket Council hearing in front of judicial commissioner Michael Beloff QC on 10 July.