250,000 homes in South are STILL without power, train networks are paralysed and now England will be hit by SNOW – with bill for damage set to hit £500m after record 122mph winds
Travel chaos caused by Storm Eunice is set to continue through today as the £500million clean-up begins, around 250,000 people across Britain remain without power, and parts of England will be hit by up to 8in of snow this weekend. 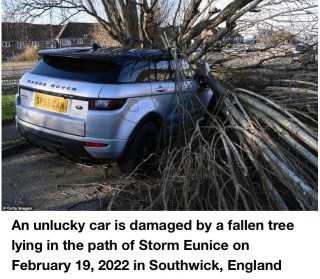 At least four people have been killed in the UK and Ireland as record-breaking gales of 122mph howled through the country yesterday in one of the worst storms to have smashed the isles in decades.

In dramatic scenes, the roof of The O2 in Greenwich, London was torn apart, while trees were ripped up, debris was sent flying, shoppers were blown over, and the spire of St Thomas Church in Wells, Somerset came crashing to earth.

More than 430 flights were cancelled or diverted and London City Airport was closed for most of the day. An estimated 5million were gripped by livestream video of aircraft attempting to land at London’s Heathrow Airport during the storm.

Around a quarter of a million people are still without power. As of last night, the number of households without power listed by providers was: 6,000 in Northern Power, 112,000 in Western Power, 260 in Electricity North West, 156,000 in UK Power Networks and 120,000 in the Scottish & Southern networks.

The Met Office has now issued a yellow warning for heavy snow in Yorkshire and Lancashire, particularly those living in the Peak District, from 11am until 3pm today. Some roads and railways will likely be affected with longer journey times, the national weather agency added.

‘A short period of heavy snow may cause some temporary disruption on roads, mainly across higher ground such as the Peak District,’ the Met Office said.

A less-severe yellow wind warning has also been issued for much of the south coast of England and South Wales on Saturday.

Many train services remain suspended on Saturday morning and ‘do not travel’ notices are in place for routes including the Southern, Thameslink and Great Northern networks. Passengers are still being asked to avoid travelling where possible.

Greater Anglia and Stansted Express have suspended all services due to multiple trees on the line with trains not running until after 10am.

Meanwhile, Avanti West Coast expects some routes to remain closed until mid-morning with some rail replacement bus services, while LNER has announced ‘possible disruption’ through Saturday morning and Southeastern is cancelling services throughout possibly the whole day due to more trees having fallen onto lines overnight.

Transport Secretary Grant Shapps told broadcasters this morning that the public should expect disruption for the rest of the day.

He said: ‘Teams have working through the night to try to get road and rail reopened. But of course, expect disruption today –trains are in the wrong locations, there’s still debris being removed from our roads, airports are expected to be very busy with people catching up with flights.

‘So expect disruption, do check before you travel… but things are returning to normal.’

London Fire Brigade said it took 1,958 calls on Friday as Eunice hit the capital – three times more than the previous day. The service tweeted: ‘Although the worst of #StormEunice is over its affect may extend into the coming days. Please be aware of the potential for loose structures or falling debris’.