[STORY]:- The Deeds Of The Housemaid – Episode 4 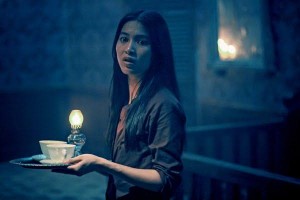 Two years after our marriage, my husband was seduced by his secretary in the office. They had an affair and he came home to confess to me by himself. He wasn’t spiritually strong then like he’s now. When I listen to his story and carried out my investigation I realized the whole episode was not his fault except that he was weak will. She had succeeded in seducing two other men in the same office including the director, my husband was her third victim.

I guess I was careless not to do anything about it when my husband started talking about how nice and beautiful his new secretary is. I deliberately went to my husband’s office one day just to see this secretary he had talked so much about. She is beautiful, fair in complexion, very curvy and charming. When I saw her I lost my peace, the same feeling I am having with Stella now. I felt intimidated seeing her around my husband because her dressing that day too was a thread to any man around her. I didn’t talk to her except for the greetings.

I went through a major surgery and I was on bed rest for closely three months. This was the most regrettable time of my life. No wonder the Bible says “when men slept the enemies came and sowed tares”. Of a truth, the enemy sowed tares into my vineyard during this time. Because of my ailment Chioma sowed tares of adultery into my marriage. This was the same time Stella took grip of my kitchen. She filled in the gap for me, took care of me, my husband and my house. Stella got closer to my husband this time than ever. My husband saw the qualities that makes her better than me within this time.
The seed of immorality sown by Chioma in my husband’s office and my marriage caused us a lot. The company went on financial recess for almost two years. My husband was not paid for like four months. When Chioma left that company things got better, but a seed has already been sown. Chioma made my husband to have a taste of another woman. She planted a seed of lust in my husband. If I don’t do something fast, the seed will grow and bear bitter fruits in my marriage. I see Stella as a fertile ground to grow the seed planted by Chioma. I want to get rid of Stella so I can get my husband back. Now that he’s lusting after Stella who lives under his roof, he might fall for her someday. My husband is not strong will, he is yet to fall obviously because Stella has not made any advances at him. I would not fold my hands and allow affliction to rise the second time. Stella must leave my house.
The condom I found in my husband’s briefcase was used the day they traveled for a workshop. Everything was Chioma’s hand work. The codom has been there for a long time but my husband was not aware. I didn’t discuss this with anyone because no one will believe me. My husband is a gentleman, I am a bit aggressive and loud. I also try to help him protect his name, especially in the church. It was a mistake, so I decided to deal with it between us. Thereafter I have not suspected him for anything until he started lusting after Stella. My mum told me that if a man is lusting after a woman, the only way he won’t fall is to stop seeing the woman. I think this is the right time my husband stop seeing Stella.
Why should I keep a woman who is more beautiful than me in my house?
Why should I keep a woman who is stealing my husband’s attention away from me gradually?
Should I continue to die in this fear?
Do you say I should leave a woman whom my husband is lusting after in my house?
What if he carry out his threat?
What if Stella begin to find interest in my husband?
If she wants my husband, in a tinkle of an eye, she will have him.
I’m working on my character. But I learnt men get carried away by what they see. My husband is already carried away my Stella’s beauty. I’m out to redeem my husband back.

Should I pursue Stella from my house or I should keep her?