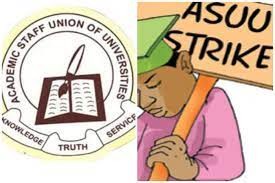 Another confrontation between the federal government and the Academic Staff Union of Universities may ensue following the decision of the Federal Ministry of Education to exclude state universities from the recommended 180 per cent pay rise for lecturers.

With the exclusion of states, ASUU may against confront the federal government over the decision which couild lead to another industrial action.

According to Punch, the spokesman for the Federal Ministry of Education, Ben Goong, in an interview in Abuja on Wednesday, explained that the Federal Government could not dictate to states on education as it is on the concurrent legislative list.

A committee led by the Pro-Chancellor of the Federal University of Lokoja, Prof. Nimi Briggs, had reportedly recommended a 180 per cent pay rise for lecturers, but the government was said to have favoured a 100 per cent increase.

The ASUU President, Prof. Emmanuel Osodeke, insisted that any agreement reached with the Federal Government would be binding on the states, thus opening another battle front between the union and the government.

The PUNCH reports that members of ASUU, including federal and state universities, had embarked on a strike on February 14, 2022.

Following the inability of the Minister of Labour and Employment, Chris Ngige to resolve the strike, the President, major General Muhammdu Buhari (retd.), two weeks ago directed the Minister of Education, Adamu Adamu, to take over the negotiation with the ASUU leadership.

To compel a quick resolution of the crisis, the Nigeria Labour Congress held nationwide protests on July 26 and 27 in solidarity with the union.

However, ASUU on Monday extended the industrial action by another four weeks.

“Any agreement made with ASUU is only binding on the institutions owned by the Federal Government. The state government will handle their own institutions.”

But reacting to the government’s position in an interview with The PUNCH on Wednesday, the ASUU president stated that the university system is a single entity, arguing further that there was no disparity between state and federal universities.

The ASUU leader contended that the few institutions that did not join in the strike were not their members.

He also warned that Nigeria had just one university system and as such the issue of salary is personal to the union.

Reacting, Osodeke stated, ‘‘Whenever ASUU is on strike, it is not about state ASUU or federal ASUU. We have one ASUU representing all universities in the country; those schools that are not participating in the strike are not our members.

‘‘The issue of salary should be left to the union to decide because when there was minimum wage adjustment, both federal and state schools were a part of it; even TETFund, it funds both state and federal institutions. Do we have a federal NUC or state NUC?

‘’The issue of salary negotiation is exclusive to the union. If a state can increase it, good; but we have one university system in Nigeria, and the state cannot even pay lesser than what the Federal Government is paying.’’

Commenting on the controversy, Ekiti State Commissioner for Information, Akin Omole, said on Wednesday that the state was not part of the ongoing negotiation between the FG and ASUU, hence, any agreement reached could not be binding on it as far as ASUU members in Ekiti State University were concerned.

“With the principle of federalism, it is the employer and the employee that determine the pay. The salaries of workers in all states of the federation are not the same, then the issue is that what happens in another state cannot be binding on them.”

Likewise, the Benue State Commissioner of Information, Culture and Tourism, Michael Inalegwu said the state government was not involved in the ongoing negotiation between the FG and the university lecturers.

He said, “The Benue State Government is not involved in the negotiation; whatever agreement they reached may not be binding on us because they are different structures.  But you should know that our state government places its lecturers in the state university at par with their counterparts at the federal level.”

But the Anambra State Commissioner for Education, Prof. Ngozi Chuma-Udeh, said the state was involved in the negotiations and would implement the outcomes.

She said, “We have a governor who takes education seriously and he is also a unionist. We are involved in the negotiations of the Federal Government with ASUU and anything they arrive at will be duly effected in Anambra.

“Whatever negotiations other states are into, Anambra is also in it; we are not backbenchers in matters that have to do with education and especially when it has to do with progressivism.”