The game which took place at the Baba Yara Stadium in Kumasi, Ashanti on Friday, ended in a goalless draw. 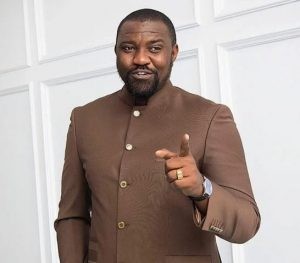 John Dumelo, the popular Ghanaian actor, is unrelenting in his mockery of the Super Eagles of Nigeria.

On Friday, Dumelo vowed to walk barefoot from Accra to Lagos if the Eagles won the first leg playoff fixture of their 2022 FIFA World Cup Qualifier against the Black Stars of Ghana.

The game which took place at the Baba Yara Stadium in Kumasi, Ashanti on Friday, ended in a goalless draw.

Reacting to the match, Dumelo took to his Instagram page on Friday where he said, “Dear super chickens, I was very confident you won’t win this game. But before you leave for Naija I have free ginger from my farm for you.”

The actor turned politician maintained that he was a man of his words, and would have indeed walked if his country lost the game.

Dumelo also stated that before he made the public vow, he was “spiritually” certain that the Eagles would not win the match.

“I know some people wanted to see me walk from Accra to Lagos this morning if Nigeria had won, I am a man of my words. I would have walked but spiritually, I knew what I was saying,” he wrote.

The second leg of the qualifiers is set to hold at the MKO Abiola National Stadium, Abuja on Tuesday.