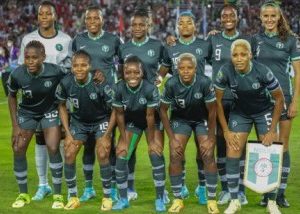 Despite dropping in the ranking, the Falcons remain number one in Africa.

The team’s drop may not be unconnected to their poor outing at the 2022 Women’s Africa Cup of Nations (WAFCON) where they finished fourth.

New WAFCON champions Banyana Banyana of South Africa moved up from 58th spot to 54th and are now second on the continent.

Germany, who lost to England in the European Championship final, climbed three spots to number two.