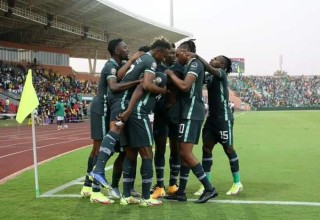 The Super Eagles sealed an impressive win against the Pharaohs of Egypt in their AFCON 2021 Group D opening game at the Roumde Adjia Stadium, Garoua on Tuesday.

Following the impressive performance and well deserved win, Completesports here appraises the Austine Eguavoen’s men, player-by- player on a scale of 1 to 10, against the seven-time African champions.

Made a timely stop with his foot to deny Mohamed Salah who beat the offside trap.

Other than that chance didn’t really had much to do in the game as he commanded his area well.

Was a constant threat at the right side with marauding runs and dangerous crosses which was not taken advantage of.

Aside his attacking threats he carried out his defensive duties well.

Had a shaky start but recovered well to marshal the defense line.

Made an important clearance from a dangerous cross with Egyptian players waiting to pounce.

Just like Troost-Ekong, did well in dealing with any threat from the Egyptian attack.

Unfortunately, he had to go off after sustaining an injury.

The left-back did very well in taking care of Mohamed Salah who had to switch wings after being frustrated.

Provided the assist for Iheanacho to put Nigeria ahead with a clever header.

Worked his socks off in keeping the midfield tight and helped the Eagles hold on to their lead.

Another player who put in the shift in the midfield to contain the crafty Egyptians.

Faded in the closing stage of the game as the Egyptians starting dominating.

Scored one of the goals of the tournament with a superb strike which proved to be the winner.

Was deservedly named Man of the Match for his brilliant effort.

Kept the Egyptians verry busy in the first half and in the early part of the second half with his runs and dribbling.

Was later replaced deep into stoppage time after an impressive showing.

Wasn’t one of his best performance for the Eagles as he struggled to impose himself in the game.

Was later replaced with less than 20 minutes remaining in the game.

Almost marked his AFCON debut with a header from a tight angle but was denied by a brilliant save by the Egyptian keeper.

Had to be replaced by running the Egyptian defense ragged.

Was brought in to add bite to the attack but was the architect of two wasted efforts which would have killed off the Egyptians.

Made his Eagles debut after coming on for Awoniyi but didn’t do much to put pressure on the opponent’s back line.

Was brought on for the injured Omeruo for his AFCON debut and slotted in well as he helped the Eagles to see out the win by keeping the Egyptian attack at bay.

Another player who made his Eagles debut against Egypt after coming on for Iheanacho.

Did his own bit in keeping the midfield tight as the Egyptians came out in search of the equaliser.

Came on late in the stoppage time for Moses Simon and helped the Eagles to the finish line.