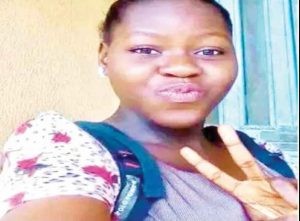 Tears flowed bitterly on Friday when family members and friends gathered to inter the remains of Rachael Opadele in Oyo State.

Opadele was abducted by gunmen last week alongside Mr Olugbenga Owolabi; owner of a hotel where she worked part-time due to the ongoing strike by the Academic Staff Union of Universities. They were both killed on Wednesday by their abductors despite payment of N5m ransom.

Owolabi was said to be living in Maryland, United States of America and recently decided to invest in a hospitality business in Ogbomoso. The hotel was said to have been opened in December 2021 and he was killed a few months after.

Sources said he travelled outside of the country a few weeks ago and only returned to Ogbomoso the day he was kidnapped by the hoodlums.

Rachael’s corpse was taken from the mortuary to the burial for interment witnessed by the deceased’s two siblings, members of the First Baptist Church, Abaa and the Lydia Auxiliary, a unit she belonged to in the church.

The pastor in charge of the church, Rev. Gbenga Adedokun, in a brief sermon at the cemetery said security should be prioritised by those in government.

Adedokun said, “Death does not strike according to age. There are times the younger person will be taken and the older ones will be spared by death. Death is the end of all but nobody knows the time. That is why we must all be ready. Age doesn’t determine who the next to die is but judgment is fixed for all.

“The poor, the rich, the young and the old will stand to give account of their sojourn here on earth before the throne of God. Nobody knows who the next person is but judgment is fixed.”

The bereaved mother, Mrs Grace Opadele, in a brief interview with our correspondent on Friday said that she couldn’t query God over the incident.

She said, “I cannot query God over the incident. Rachael had many dreams which I cannot mention all. The request I want is that the government should tackle insecurity with seriousness. I don’t want what happened to me to happen to anyone. It’s a painful thing which I don’t want others to experience.

“I also want the government to find a permanent solution to the problem of ASUU. I am not seeking justice. I am not interested in any case. The governor should address insecurity and the problem in the education sector. Those are the two requests I make of the government.”

The management of LAUTECH during a condolence visit to the mother of the murdered student described the killing as saddening, while praying to God to console the family.

Speaking with Saturday PUNCH, the institution’s spokesperson, Mr Lekan Fadeyi, said the government was working to improve security in the area. He said the university had told the family to make available to it any information they wanted to escalate concerning the case.

Apart from the two victims killed by the gunmen, they also shot dead a commercial motorcycle rider popularly called Okada rider contacted to convey the N5m ransom bearer to the kidnappers’ den, Mr Idowu Ajagbe. But the ransom bearer luckily escaped with gunshot injuries. He was said to be the one who broke the news of the gunmen’s havoc after collecting the ransom.

The slain LAUTECH student who was studying Fine and Applied Arts was said to have started a part-time job at the hotel in the Abaa community close to the institution pending the suspension of the ASUU strike before hoodlums kidnapped her and the hotel owner on July 28 around 8pm at the hotel.

Our correspondent gathered that the lady’s father died some months ago back and the family had yet to overcome the grief when the kidnappers struck.

It was further gathered that there were cries at the homes of the bereaved families on Wednesday when news filtered in that the abductors killed them after collecting ransom.

The senseless killings sparked a massive protest in the community, forcing students and youths including commercial motorcycle riders to block the Ogbomoso-Ilorin highway.

The First Baptist Church, Abaa, was also hit hard by the killing because Rachael and the Okada rider, Ajagbe, were members of the church.

While Rachael was a member of Lydia Group in the church, Idowu was said to be the treasurer of the church. The death of the members was devastating to the church.

Adedokun told our correspondent that the motorcycle rider was contacted by the Baale of Abaa to assist in conveying the ransom bearer to the kidnappers and he obliged.

Adedokun said, “The Okada rider was our church treasurer and before any member can attain that position, they must have shown commitment, integrity and availability to the service of God.

“Rachael was a member of Lydia Auxiliary. Lydia Auxiliary is a union under Women Missionary Union (in Baptist churches).  Last Sunday was Lydia Week for the year and the lady was slated to handle one of the programmes but she could not participate because she was abducted. Before then, she was always available. Her mother is also a member of the church. Her husband who was Rachael’s dad died late 2021.

“The Okada rider was called by the Baale to take the ransom bearer to the kidnappers. He knew that Rachael attended the same church with him because prayers were offered for her release. Every member of the church knew that the abducted lady was a member of the church. The ransom was taken to them but they collected it and still killed their victims. We don’t know why they did that.

“Before that, there were two cases and those abducted were released but this case turned out differently. Ajagbe was buried on Thursday. The church will miss the two of them. It’s a pity their journeys ended this way. We pray to God to uphold the mother, comfort her and other members of the family.”

The President of the Students’ Union Government of LAUTECH, Anuoluwa Adeboye, in an interview with our correspondent described the killing of the victims, especially the student, as disturbing for the students, and staff of the university.

The SUG had earlier immediately after the abduction called on the President, Major General Muhammadu  Buhari (retd.); Governor Seyi Makinde and security agencies to do everything possible to secure the release of the student and the hotelier.

The students in a statement flayed the government for not doing enough to secure the release of the student when news of her death filtered in on Wednesday.

The statement read, “Our cries to the government generated nothing but more pains, hurts, fears and sorrow. If we have government or community stakeholders that responded swiftly to that unfortunate incident, the killing would have been prevented.

“This is no doubt an affirmation of the saying that, ‘All animals are not equal.’ If it were to be your daughter that was kidnapped, this unfortunate issue would not have happened. As a matter of urgency, the federal and state governments should prioritise our safety and security. We call on the government to act fast now and let justice be served.’’

The students asked the government to present to the public killers of their colleague, adding that they wouldn’t fold their hands while the government continued to be lackadaisical about security matters in their community.

Speaking in an interview with our correspondent on Friday, Adeboye stated that apart from the calls earlier made, he visited top police officers at the police headquarters in Ibadan, Oyo State, on the security situation in the area, hoping that things would improve.

He said, “We have been urging the government on the need to increase security in the areas surrounding the university. Security agencies should also gather intelligence at the areas to prevent crimes. University and government officials also went to the residence of the student to sympathise with them.

“The atmosphere there was sorrowful and the situation was so bad that one of the government officials could not withstand the bereaved mother’s sorrow. She was the first child.’’

Some of the murdered student’s friends had taken to social media to mourn her gruesome death.

One of them, Adeniji Aderogba, wrote on Facebook, “Rest on Rachael Opadele. I pray to the Almighty God to forgive your shortcomings and give Opa’s family the fortitude to bear the loss. May the killers of Rachael regret this and pay for it bitterly. Grace Opadele, take heart, ma.”

Also speaking, the Vice Chairman, Oyo State Council of Obas, Oba Francis Alao, also called for the deployment of more security operatives in communities close to the border of Oyo and Kwara states due to kidnappings in the area in recent times.

Oba Alao, who is the Olugbon of Orile Igbon, in the Surulere Local Government Area of the state, said in an interview with our correspondent that urgent measures should be taken to curb the problem of insecurity in the area.

The monarch said, “All hands are on deck to curb further criminality in Orile-Igbon. I am much in touch with the police and state government on the need to make the area safe. I am also in touch with my Baales in charge of the affected areas and we are working with the police. All relevant stakeholders have commenced proper security of the environment including vigilantes and I believe this will help.

“But we need more reinforcement to back up the Orile-Igbon Police Division and also a mobile police support base to secure the border line of Kwara and Oyo states around Ote.”

Recall that two people were kidnapped not long ago in the Surulere LGA and their abductors collected ransoms before releasing them. Christopher, supervisor of a farm belonging to the late former governor of the state, Adebayo Alao-Akala, was abducted by hoodlums in Jabata, Surulere LGA. Also, the owner of a private clinic in Gbede community, Rasheed Oladoye, was kidnapped.

Meanwhile, a former military governor of Oyo State, Maj. Gen. Oladayo Popoola (retd) ; Justice Afolabi Adeniran and  a member of the Board of Trustees of the Peoples Democratic Party, Dr Saka Balogun, will lead other prominent indigenes of Ogbomoso including youths of the town to hold a rally against the worsening insecurity in  the town on Monday.

This was contained in a statement sent to our correspondent on Friday by the President, Ogbomoso Community Youth Forum, Rev. Kayode Olaleye.

The statement read, “In view of the deteriorating security situation in Ogbomoso zone, as evident in recent waves of kidnapping for ransom and killing of victims, the Ogbomoso Consultative Council led by Major General Oladayo Popoola OFR (retd),  Justice Afolabi Adeniran (retd) and Dr Saka Balogun in consultation with the elders of the community and in conjunctions with the youths under the aegis of the Ogbomoso Community Youth Forum,  will be holding a rally to create awareness on the fear-inducing phenomenon.

“We assure our people that all bad eggs, perpetrators and collaborators will be brought to book. We can’t be in deep slumber or reduce ourselves to mere lamentations like weaklings while terrorists prowl our land.”