Terrorist Attacks: Buhari Told To Resign Immediately Or Be Impeached 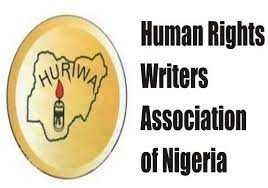 The group, on Wednesday, asked President Muhammadu Buhari to resign or be impeached over his alleged perennial failure to take decisive action on terrorists.

The Human Rights Writers Association of Nigeria (HURIWA), has reacted to the increasing security threats spreading over Nigeria.

The group, on Wednesday, asked President Muhammadu Buhari to resign or be impeached over his alleged perennial failure to take decisive action on terrorists.

HURIWA’s National Coordinator, Comrade Emmanuel Onwubiko, in a statement, also said the Buhari government and the military are fine with the spate of terrorist attacks in the country as they have failed to deploy the 12 Super Tucano fighter jets against terrorists turning the country into another Afghanistan.

Recall that terrorists on Tuesday attacked the advanced security convoy of Buhari near Dutsinma, Katsina State, reportedly killing two policemen in the process. The officials were travelling to Daura ahead of the trip of the President to his hometown for Sallah.

Recently, a community leader in the Birnin Gwari Emirate of Kaduna State Zubairu Abdulra’uf revealed that farmers in the area paid about N400 million to bandits in order to be allowed to carry on with their farming activities.

HURIWA’s Onwubiko said, “These major incidents are too heavy to be ignored. Terrorists are becoming daring because the government is in bed with armed Fulani terrorists.

“These bandits were designated as terrorists by a Federal High Court in November 2021 but eight months after, the government has not taken any definitive military actions to stamp them out.

“In fact, the 12 Super Tucano fighter jets bought from the United States have not been deployed against the terrorists in the North-West despite that the court judgement ordered the government to do so.

“The failure and inaction of the government have buoyed the heinous and condemnable crimes of the terrorists who now make a fortune from the odious venture of kidnapping Nigerians and have gone as far as collecting taxes like in Kaduna where farmers have so far paid N400 million in protection tax to Fulani terrorists.

“Similarly, attacks on prisons have grown so much under Buhari. There have been about 15 jailbreaks in the last five years under Buhari and over 3,400 inmates have fled.

“Buhari has failed Nigerians and himself. This is the time for either Buhari to resign or he be impeached if the National Assembly members can grow ball. They must do it or else Nigeria is doomed and over 200 million refugees will flow out of Nigeria.

“Why is the minister of interior still on seat?”