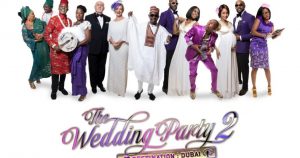 The much anticipated Nollywood movie, ‘The wedding party Two’ has been released in cinemas across the country on Friday December 15.

Just like ‘The Wedding party One’ was a blockbuster, much has been expected from the second part.

From posts and comments on social media, it is obvious that Nigerians are having mixed reactions on ‘The Wedding Party two.’

While some believe it has lived up to its expectations, others think it is just overrated, over hyped and a total waste of time.

Some viewers, who spoke with The Nation shared their views and opinions about the movie.

According to Anie  Ufia, a student of Unilag she said

‘Uh, I agree that the movie was overhyped but it’s not so bad. The cast was okay. I like the fact that they brought in Nollywood legends like Patience Ozokwor and Chinwetalu Agu. The humor too was on point with Chigul and Seyilaw, loved their scenes.

One of my problems with the movie however is that it’s too short. It seemed like I was watching an episode of Jenifa’s diary. They didn’t work on building the story, instead left the audience to figure out the rest. I expected much more than was given from Wedding party 2. I don’t even advise them to do a Wedding Party 3 ????????‍♀

Damilola Agunloye, an entrepreneur feels the movie had elements of exaggerations. She said:

Exaggerations in the movie was uncalled for. Why did they have to put in too many comedians and some were not even funny like AY.  The white girl’s father did better with the comedy than our Nigerian comedians.  And the movie ended too abruptly.  Everyone in the cinema shouted when the credits started rolling.  I agree they shouldnt bother with a part 3. After overhyping, people were looking forward to something splendid, people were disappointed.

An On Air Presenter with eNRadio, Samad Abdurrahman said:

The cast is great although having too many stars in one movie will be a bit jam-packed, cos not all the stars will get enough screen time, except them being there is just to promote the movie itself.

It’s going to be filled with unnecessary and excessive jokes. Cos of the comedic characters starring in it.

But overall I like the concept, the brother proposing to the white babe by mistake.