THIS IS DISGUSTING!!! Real Madrid React To Racist Abuse Of Vinicius Jr 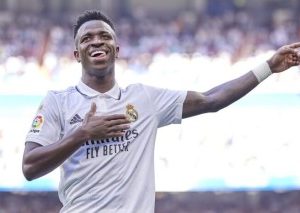 Real Madrid have rejected the ‘racist and xenophobic’ attack on their player, Vinicius Jr.

In a statement via its website on Friday, ahead of their LaLiga derby with Atletico Madrid this weekend, Real Madrid said that the club had directed its legal services to take legal action against anyone who uses racist expressions toward their players.

“Real Madrid CF rejects all kinds of racist and xenophobic expressions and behaviors in the field of football, sport and life in general, such as the regrettable and unfortunate comments made in recent hours against our player Vinicius Junior.

“Real Madrid wants to show all its love and support for Vinicius Junior, a player who understands football as an attitude towards life based on joy, respect and sportsmanship.

“Football, which is the most global sport that exists, must be an example of values and coexistence.

“The club has instructed its legal services to take legal action against anyone who uses racist expressions towards our players.”

Recall that Vinicius was on the receiving end of a racist remark for his dancing celebration.

The Brazilian international is known to celebrate most of his goals by dancing near the corner flag in front of supporters, be it the home fans or the away end of the stadium.

However, during an appearance on El Chiringuito, Pedro Bravo, the president of Spanish football agents, commented on Vinicius’ celebration.