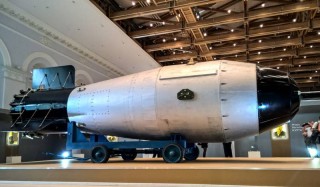 Tsar Bomba, (Russian: “King of Bombs”), byname of RDS-220, also called Big Ivan, Soviet thermonuclear bomb that was detonated in a test over Novaya Zemlya island in the Arctic Ocean on October 30, 1961. The largest nuclear weapon ever set off, it produced the most powerful human-made explosion ever recorded.
The bomb was built in 1961 by a group of Soviet physicists that notably included Andrey Sakharov. At the time the Cold War between the U.S.S.R. and the United States had grown increasingly tense. Meant to be a show of Soviet strength, the three-stage bomb was unparalleled in power. It had a 100-megaton capacity, though the resulting fallout from such a blast was considered too dangerous for a test situation.

Thus, it was modified to yield 50 megatons, which was estimated to be about 3,800 times the strength of the U.S. bomb dropped on Hiroshima during World War II. In addition, the fusion process of the Soviet device was altered, dramatically lessening the fallout. The resulting weapon weighed 27 tons, with a length of some 26 feet (8 metres) and a diameter of about 7 feet (2 metres). Although officially known as RDS-220, it acquired numerous nicknames, most notably Tsar Bomba in the West.

A Tu-95V bomber was modified to carry the weapon, which was equipped with a special parachute that would slow its fall, allowing the plane to fly a safe distance from the blast. The aircraft, piloted by Andrey Durnovtsev, took off from Kola Peninsula on October 30, 1961. It was joined by an observer plane. At approximately 11:32 AM Moscow time, Tsar Bomba was dropped over the Mityushikha Bay test site on the deserted island of Novaya Zemlya. It exploded about 2.5 miles (4 km) above the ground, producing a mushroom cloud more than 37 miles (60 km) high; the flash of the detonation was seen some 620 miles (1,000 km) away.

The resulting damage was equally massive. Severny, an uninhabited village 34 miles (55 km) from ground zero, was leveled, and buildings more than 100 miles (160 km) away were reportedly damaged. In addition, it was estimated that heat from the blast would have caused third-degree burns up to 62 miles (100 km) distant.

Although a success, Tsar Bomba was never considered for operational use. Given its size, the device could not be deployed by a ballistic missile. Instead, the bomb had to be transported by conventional aircraft, which could easily be intercepted before reaching its target. Thus, Tsar Bomba was viewed as a propaganda weapon.

Following the 1961 blast, Sakharov became increasingly involved in efforts to limit nuclear tests to underground. Such a ban was signed by the United States, Britain, and the U.S.S.R. in 1963, and numerous other countries later joined the treaty.