This Man Was Rescued While Trying To Commit Suicide, What He Did Next Will Shock You (Photo) 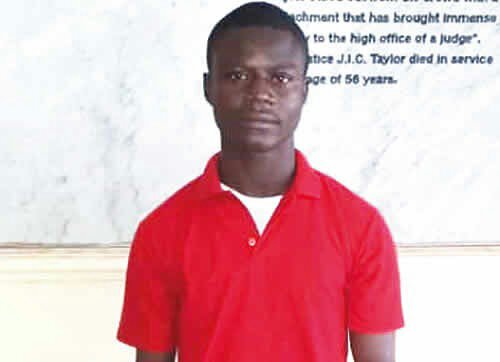 According to a report by Punch Metro, one Owolabi Ogunwande, a school dropout, who reportedly attempted to kill himself twice, has been declared wanted after allegedly absconding with a tricycle and money belonging to a trader in the Surulere area of Lagos State.

The Oyan, Osun State indigene, who came to Lagos on March 5, 2018, had reportedly tried hanging himself with a rope he found on a bridge at CMS, Lagos Island, on June 28.

He was, however, rescued by a security operative at the Toll Gate, Lekki Phase 1, Lagos.

After he was handed over to the police at the Maroko division, he allegedly attempted to commit suicide again in the cell before he was arraigned at the Igbosere Magistrate’s Court.

At the court, the 27-year-old reportedly said life had no meaning to him again and he was frustrated.

Punch Metro reports that an octogenarian, who read his story, was moved with pity and offered to help him.

A source said some officials of a government agency assisted in securing Ogunwande’s release from court.

The source said, “When he was charged to court, the agency was approached by an 85-year-old woman, who said she was interested in helping him. The woman said she believed he probably had mental issues.

“Meanwhile, a non-governmental organisation, which also showed interest in his case, assisted in taking him to the Lagos University Teaching Hospital, Idi Araba, where he was committed to a mental ward for two weeks. The NGO paid about N80,000 per week to check his mental state.

“After he was certified fit, the court released him and the elderly woman, who had offered to help him, took him to her house in Ikoyi. The woman put him in a mechanic workshop where he was an apprentice and she gave him N500 every day for transport. The woman also gave him a good room and fed him twice a day.

“However, after a week, Ogunwande started complaining that the woman was making him suffer. One night, he ran away from the woman’s house.”

PUNCH Metro reports that a government worker took him to a church where he was welcome.

Some of the church members reportedly donated cash and clothing materials to the 27-year-old after he spoke to them.

The woman who took him to the church and asked not to be identified, told our correspondent that a day after Ogunwande arrived in the church, he approached a trader in the neighbourhood and offered to assist her with her wares.

“As of this time, the NGO that paid for his medical bills at LUTH was still giving him N1,500 per day for his upkeep. The NGO had also offered to take him in that Sunday since he was no longer comfortable with the elderly woman.

“On Saturday, while he claimed to be running an errand for the trader around the church, he disappeared with the woman’s tricycle, goods and money,” she said.

The trader, Mrs Abiola Osidele, who had a warehouse in Adeniran Ogunsanya, Surulere, said she could not believe that Ogunwande absconded with her goods.

She said, “I have a warehouse in the area where I sell and distribute soft drinks to customers. He met me on Thursday and said he could drive my tricycle and assist to distribute the drinks.

“On Saturday, my worker was not around, so he said he could go and deliver an order for me. He went and did not return. The place he went to deliver the goods is around Bode Thomas area of Surulere. When I went to enquire from my customers, they said they saw him till around 8pm.

“He went with a full supply of goods, my tricycle and over N100,000. He was very jovial, respectful and cheerful. I never believed he could do this to me.”

PUNCH Metro learnt that the suspect’s phone number had not been reachable since then.

Our correspondent was told that the case was reported at the Bode Tomas Police Station.

“When the DPO saw his picture, he immediately said the boy’s look suggested he was a criminal and he had only been pretending and bidding his time.

“Again, none of his family members have been forthcoming. When we called his uncle before he fled and we told him that Ogunwande wanted to kill himself, the man said he should go ahead. The uncle said he had been a thorn in his flesh and when he was coming to Lagos, he (uncle) worked for many days to raise N2,000 for his transport because he (Ogunwande) said he wanted a better life.

“He claimed to be an orphan and said he had been saddled with the responsibility of catering to his aged grandmother who was sick in the village,” another source said.

Our correspondent learnt that the tricycle, which had a built-in container for goods, was newly bought by the trader and it had yet to be registered.

He said, “He left with a Keke Marwa loaded with goods worth about N100,000. The suspect had attempted suicide in the past. We are still investigating the incident. We want members of the public to be on the lookout for him. Because of his records of attempting suicide in the past, we are not just looking at a case of stealing, but we are afraid he may have also killed himself. So, people should also inform the police if they find any unidentified corpse. We hope that he is safe.”