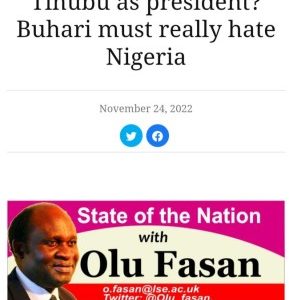 Here’s why. If General Babangida had damaging intelligence on MKO Abiola, the presumed winner of the election, an intelligence that could bring inter-national shame on Nigeria, he had a duty to stop him from running for president.

Babangida’s eternal mistake, assuming he had such intelligence, was to allow Abiola to run, encourage Nigerians to vote and then annul the election. But there was nothing wrong with saying “I don’t know who will succeed me, but I know who will not,” provided it was in the national interest.

Of course, in a democracy, a president cannot simply say: “I know who will not succeed me.” But a president should signal a nation’s values.

Yet, President Muhammadu Buhari says he doesn’t care who succeeds him. Channels TV asked Buhari: “Are you interested in who succeeds you?” He responded: “No, let him come, whoever it is!” That response has two interpretations: one positive, another negative.

That negative interpretation is my concern here, and it’s premised on Buhari’s support for the election of Bola Tinubu as Nigeria’s next president. It concerns me because I’m fully convinced that a Tinubu presidency would not only destabilise Nigeria internally, it would damage Nigeria globally, making it a big laughing stock, a butt of dark international jokes!

Truth is, next year’s presidential election will have huge long-term implications, its outcome will affect Nigeria for decades. Therefore, no patriotic Nigerian should sit on the fence; that patriotism is what underpins this intervention. To be sure, the presidential election should be as much about character as manifesto.

The presidency is too serious an office to be invested in someone with serious integrity deficit. Those ignoring character and integrity should remember the Turkish proverb: “When a clown moves into a palace, he doesn’t become a king. The palace becomes a circus.”

Returning to Buhari and Tinubu, there was a Faustian pact between them in 2015. Tinubu put it pointedly in his famous Abeokuta outburst. “Without me, Buhari won’t be president,” he said, adding memorably: ”Emilokan! It’s my turn!”

Well, Buhari now accepts it’s payback time. He’s the chairman of Tinubu’s presidential campaign council, PCC; his wife, Aisha, chairs the PCC’s women wing. Both Buhari and his wife say they want Tinubu to become Nigeria’s next president and are mobilising the North behind him.

But here are questions for President Buhari: Is he aware of the damaging allegations swirling around Tinubu? Given what he knows, does he think Tinubu is a fit and proper person to be Nigeria’s president? Is he happy that Tinubu’s life, pedigree and backstory are veiled in secrecy or, as someone puts it, a “miasma of dubiety”?

In the US, every major presidential candidate is an open book. But not Tinubu. He arrogantly refuses to answer uncomfortable questions about his past. Instead, he uses surrogates: Festus Keyamo, Femi Fani-Kayode, Bayo Onanuga – who see him as their route to advancement and are blatantly lying to Nigerians, treating them as morons. Recently, they came full throttle with deliberate untruths about the drug allegations against Tinubu.

Briefly, here’s the case: Between 1988 and 1991, Tinubu deposited $1.4m in different bank accounts, despite earning just $2,400 per month and despite confirming he had no other sources of income. The US concluded the funds represented “proceeds of narcotic trafficking & money laundering,” derived from his dealings with two drug traffickers, Mueez Akande and Abiodun Agbele.

Put simply, Tinubu was alleged to be a bagman handling and laundering drug money. Tinubu claimed the funds belonged to Kafaru Tinubu and Alhaja Habibat Mogaji, even though, years later, he told The News magazine that all the money belonged to him.

In the end, Tinubu forfeited $460,000 held in his name by Heritage Bank, where he and Akande had strong links. “Why did they return $1m?” Fani-Kayode asked. The remaining funds were released to Kafaru Tinubu and Alhaja Mogaji, who claimed ownership interests. That’s the nature of settlements: Abacha allegedly stole $5bn; half of it was returned to his family!

The biggest lie, peddled by Keyamo and Fani-Kayode, is that the $460,000 forfeited by Tinubu was a tax.The cover sheet of the certified true copy of the settle ment, issued on August 10, 2022, explicitly states under “Nature of Suit” that it’s forfeiture under “Code 625: Drug related seizure of property 21 USC 881.”

The two boxes under “Federal tax suits” were not ticked. So, the $460, 000 was not a tax but a drug-related forfeiture.

Tinubu’s surrogates and spin doctors say he wasn’t indicted or convicted. But no rational individual would forfeit $460,000 of his hard-earned money, especially when linked to drug trafficking, without fighting to clear his name.

By having a “drug related seizure of property” recorded against his name, Tinubu is seriously tainted as a presidential candidate, and would cause Nigeria huge embarrassment if he became president.

Which brings us back to Buhari. As military head of state in 1984/85, his regime executed eight young Nigerians for drug trafficking. How could he, in good conscience, campaign for Tinubu to be president without apologising to the families of those young Nigerians.

Also, given Tinubu’s stupendous unexplained wealth, does Buhari regret jailing governors for hundreds of years in 1984 for corruption? Truth is, Buhari is wrong to campaign for Tinubu to succeed him. It betrays the national interest!