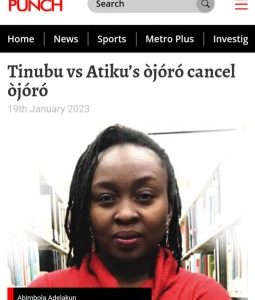 In one of those moments of comic relief only Nigeria can throw up, the All Progressives Congress presidential campaign demanded that anti-corruption agencies arrest their opponent, the Peoples Democratic Party presidential candidate, Atiku Abubakar, over allegations of corruption by his former aide.

In an electoral season, it is not unusual for party spokespersons to feign some indignation just to get in the news. What is entirely laughable about this occasion is that the APC campaign also gave anti-corruption agencies such as the Economic and Financial Crimes Commission, the Independent Corrupt Practices and other related Offences Commission, and the Conduct of Conduct Bureau, a 72-hour ultimatum to arrest Atiku.

If the EFCC, ICPC, and CCB were that efficient, would the APC presidential candidate still be in the race? If those agencies were to mark sins, would the APC itself stand? Meanwhile, now that the ultimatum has expired, what exactly will happen? Toothless and clawless bulldogs.

Having followed the revelations by Atiku’s former aide, I confess to being troubled by the almost nil response from any authorities. It is bad enough that some people who have been listening to the expose on Atiku have not done more than yawn, it is worse when you hear others double down on their resolve to vote for him.

Yes, that exposé might have revealed nothing new about our politicians but the response to corruption allegations should not be indifference. A society should at least have a minimum standard of integrity and not be unconcerned about the character of its leaders.

The apathetic attitude shows that the something that we have always known to be rotten within the state of Nigeria has become mummified. We have learned to live with calcified rot and can no longer perceive odour.

In a place where people still have some expectations of virtues from their public officeholders, Atiku would have had to respond to those revelations. People would have stood up to demand some accountability. His press team would be up to their necks writing mea culpa.

Instead, Atiku has remained virtually stoic in the face of the damaging accusations. He knows Nigeria well enough to be confident that what they said he did is not the type of sin that gets punished.That the PDP leaders too are silent on this is not even curious

They are not a coherent organisation, just a loose contraption of people using their platform to win elections. If they had a proper structure with leadership that knows what it is doing, they would not merely pretend to be dead as they are doing now.

Even if those accusations are not investigated, there should be some official response rather than this present frozenness. Part of the problem lies with the weakness of our institutions. While we have agencies who try people for petty corruption, we are yet to build enforceable mechanisms to assess the virtues of those who aspire to public offices.

It seems that nobody quite knows what to do with the revelations. This is just another day in Nigeria. All we need to do is to wait for the stories to become less entertaining, and the awkward situation will blow itself over.

A reflection on the Atiku revelations shows how much the lack of credible or objective governing standards cripples our society. We go by opinions and feelings, instinctual drives highly susceptible to human fickleness.

Just look at how that is playing out in the present saga: a man who can potentially become the president in about a month or so confessed to corruption in a secret recording, and we can only shrug listlessly. It does not help the frigidity of institutions that the citizens are just as tainted.

If the anti-corruption agencies should move against Atiku, do not be surprised that the people whose money he is accused of stealing would be the first to jump out and start yelling “persecution!” They will dredge up so much sentiment that it might even catalyse his electoral victory.

There is nowhere to go from here. The serial de-meaning of our democracy is not about to change; it works for our visionless leaders. In the absence of standards, they cannot be held to account. That is why they have no qualms about decimating local institutions.

When they need a democracy that has value to legitimise themselves, they run abroad to oyinbo institutions to harvest some of the meanings those places have accrued. At home, they do not know how to add value to anything. They just use, use, and use up.

The worst part of all the drama is that the hot air being blown by the APC is about the only major reaction to the Atiku revelations. Even though nobody not even their own supporters takes the APC seriously on this their newfound moral backbone, their pretence is still irritating.

I can bet that they do not lack a self-awareness to the point where they fail to see the irony of their demand, but they forge ahead anyway. To them, this is all a game. They are feigning integrity to redirect the embarrassment of their gaffe-prone candidate who himself is an embodiment of shadiness.

Not too long ago, the ethical issue that arose for their party—and which should have been addressed with the same zeal with which they are presently pursuing Atiku—was their candidate’s history with drug trafficking. The best they did was go on live television to huff and puff.

Even though their candidate’s name appeared in court documents, they asked us to take their word for it that nothing happened. Just like the case with Atiku, there was no formal investigation nor closure on that issue. It was left hanging until it fizzled out.

The same APC presidential candidate also has some pending issues of perjury, but that will not be resolved either. The best his clownish campaigners can do is at least be quiet. They want to talk about Atiku’s issues while they vainly cover theirs with a shard of a fractured clay pot.

To deflect Atiku’s shame, his camp too sent out their own hounds to respond to the APC’s shameless overreach. After the PDP agents fulfilled the expectations of denying the allegations of corruption, they fired several counter-allegations back at their accusers.

The two sides, one zero trying to balance itself on top of another zero, exemplify what is wrong with Nigeria. Their respective presidential candidates served in public office, they were accused of graft, but that was about all to it. The few times we have gotten close to the truth of their corruption, it was either when we are treated to a series of exposes by a disgruntled—yet unprincipled—whistleblower or when they launch public attacks on one another.

For years, Atiku’s defenders have insisted we bring out any proof he is corrupt. When some evidence finally surfaced, it did not come from any official source that had properly investigated & painstakingly documented it. Instead, it came from a private confession—supposedly from the horse’s mouth—made public.

Both the APC and PDP presidential campaigns are now asking each other to be arrested and disqualified from the contest. Both parties know that nothing will come out of their show of shame, and that is why their frivolity is so emboldened. Their puerile exchange is a game of two unscrupulous players trying to even out each other’s cheating. Both may find their mutual òjóró entertaining, but the discerning among us refuses to be impressed.