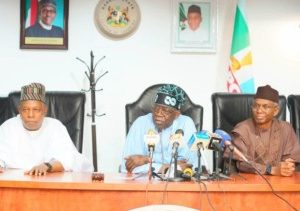 There has been stiff competition from stakeholders in the North-West where El-Rufai comes from and the North-East, the home base of Shettima, who is a former governor of Borno State.

While El-Rufai was a chieftain of the defunct Congress for Progressive Change (CPC), Shettima belonged to the All Nigeria Peoples Party (ANPP) faction, two out of the four legacy parties that merged in 2013 to form the APC.

The other two parties were the Action Congress for Nigeria (ACN) and a faction of the All Progressives Grand Alliance (APGA) led by former Imo State governor, Rochas Okorocha.

If Tinubu settles for either of the two, it will signal an end to the speculation on whether the APC will field a Muslim-Christian ticket as both El-Rufai and Shettima are Muslims.

Tinubu, who won the presidential ticket of APC a month ago in Abuja, had submitted the name of Ibrahim Masari, a chieftain of the party from Katsina State as his running mate in an effort to meet the deadline for the submission of nomination forms of presiden tial candidates for next year’s election.

However, stakeholders in the party had claimed that Masari is just a ‘placeholder’ as there were plans to substitute him within the substitution window in the electoral guidelines.

This was also confirmed by Tinubu when he said he was still searching for his running mate shortly before his trip to France.

Speaking with Daily Independent, an associate of Tinubu said picking the running mate has been a hard choice for Tinubu owing to several vested interests who are jostling for the position.

He, however, said Tinubu has narrowed down his choice to Governor El-Rufai and Shetimma as both men are tested politicians who have the capacity to get the much-needed votes for the APC in the North.

According to him, “It is one of the key reasons why Tinubu jetted out of the country to France so as to have a breathing space to weigh the several options before him.

“Right now, I think we have made a lot of headway in search for the running mate.

Right now, I can categorically tell you that Asiwaju, after extensive consultation with stakeholders in the party, has penciled down El-Rufai and Shettima as his choice.

‘Right now, he is stuck between both men and I strongly believe that one of them will emerge as his running mate”.