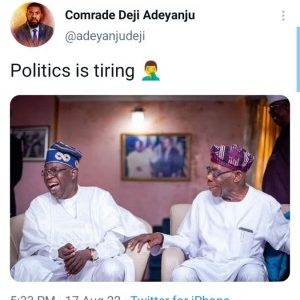 Tinubu met with Obasanjo at his residence in Abeokuta, Ogun State on Wednesday.

The meeting between the Southwest political leaders was believed to be a consultation.

Reacting, Deji Adeyanju, an Abuja-based rights activist, said Tinubu’s visit to Obasanjo indicated that politics is something else.

Adeyanju recalled how the APC presidential candidate once called Obasanjo an election rigger.

He recalled how Tinubu asked Nigerians not to take Obasanjo seriously for criticizing President Muhammadu Buhari in 2019.

In a tweet, Adeyanju urged Nigerians against fighting themselves over politicians.

According to Adeyanju: “Tinubu who called Obasanjo an election rigger who should not be taken seriously when he criticized Buhari in 2019 today has spent hours with Obj consulting. Politics is something else.

“Don’t fight each other over politicians. They are not worth it. I know them very well.

“They are all extremely close friends and business associates. Go and hustle so you can tell them to their faces to Getat! There’s nothing they hate more than that.” 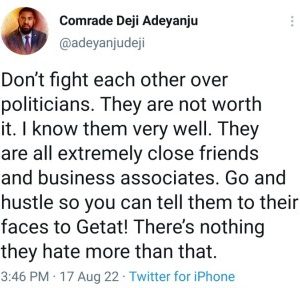