Too Bloody! One Killed, Three Injured As Soldiers And Shiite Members Clash In Yobe 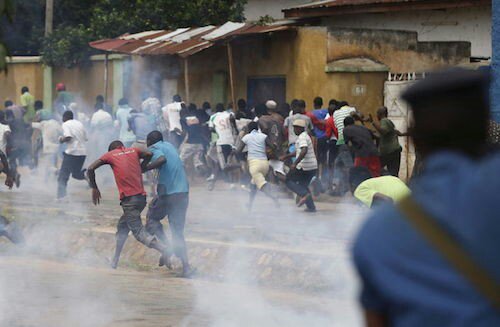 One person was reportedly killed and three others injured in a clash between the military and members of the Islamic Movement of Nigeria in Potiskum, Yobe State on Friday, Punch has reported.

Trouble started when IMN members rounded off their Ashura procession with prayers around 8:30am near Central Hotel, Potiskum.

The Yobe State Police Commissioner, Abdulmaliki Sunmonu, who confirmed the incident to journalists said that three persons were injured during the clash.

He said that the JTF responded after the IMN members attempted to seize one of the security operatives’ rifle.

He said he was awaiting more details about the incident.

He said: “I will update you as soon as I get full details on the clash.”

A member of the IMN group, El-Tafseer, who spoke to journalists, said the police boss did not give the true reflection of what happened, he explained that they were attacked by the soldiers minutes after the Ashura procession had closed.

He said, “We just sighted the soldiers armed with guns and sticks approaching us. They started beating and harassing us to disperse.

“We began to run when they fired gunshots indiscriminately. Three people were injured and a teenager, not our member, was hit by a stray bullet in the head.

“He died in the hospital.

“They also arrested Malam Gambo Abbas and detained him.”

Our correspondent was told that the indiscriminate gunshots threw the town into confusion with residents and passers-by scampering to safety.