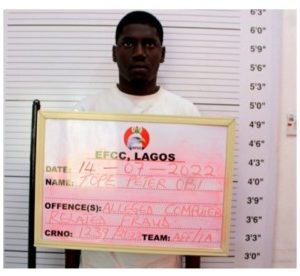 Justice O.A. Okunuga of the Lagos State High Court sitting in Ikeja, on Tuesday, November 22, 2022, convicted and sentenced one Tope Peter Obi to one-year imprisonment for possession of fraudulent documents.

A statement released by the EFCC says the convict was arraigned by the Lagos Zonal Command of the Economic and Financial Crimes Commission, EFCC, on a one-count charge bordering on possession of fraudulent documents, an offence contrary to Section 318 of the Criminal Law of Lagos State 2011.

That you, Tope Peter Obi, sometime on the 8th day of July, 2022 in Lagos, within the jurisdiction of this Honourable Court, had in your possession documents wherein you fraudulently represented yourself as Chris Lane, an American to one Hewitt, a representation of which from the circumstance of this case you knew or reasonably ought to know to be false.”

He pleaded “guilty” to the one-count charge.

In view of his plea, the prosecuting counsel, G.C. Akaogu, gave a review of the facts, detailing how intelligence reports had linked the defendant to the alleged crime, upon which he was arrested and subjected to further investigation.

The statements of the defendant and the items recovered from him were also tendered in evidence by the prosecution.

Following the guilty plea of the defendant and the evidence presented before the court, the trial Judge found him guilty as charged.

The defence counsel, Bisola Oshundunmade, pleaded with the court to temper justice with mercy.

After reviewing all the evidence and submissions of both parties, Justice Okunuga sentenced the defendant to one-year imprisonment, with an option of fine of N500,000.

Items recovered from him, including iPhone X, were forfeited to the Federal Government.

The defendant was also ordered to sign an undertaking with the EFCC to be of good behaviour and never to engage in any form of economic and financial crimes within and outside the shores of Nigeria.