Totti Opens Up On Ronaldo’s Potential Move To Roma 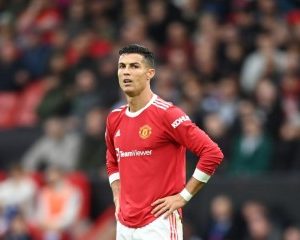 AS Roma legend, Francesco Totti has claimed to be aware of the ‘reality of the current situation’ of Manchester United forward Cristiano Ronaldo’s links with the Italian club.

Ronaldo has communicated with Man United that he wants to leave Old Trafford should an agreeable offer come from another club.

The Portugal captain scored 24 goals for Manchester United last season across all competitions.

Man United’s failure to qualify for the UEFA Champions League and failure to sign new players so far in the transfer market thus have seemingly made Ronaldo look for another club.

Ronaldo, 37, is being linked with many big European clubs, including Roma, Chelsea, Bayern Munich and Juventus.

Totti said: “To be honest, I never believed in Ronaldo to Roma, because I know the reality of the current situation.”

However, Totti believes Paulo Dybala, who recently left Juventus, should have been approached by Roma’s board.

He added: “Dybala was possible, very possible. However, other things happened then and the idea vanished. He will go elsewhere.”