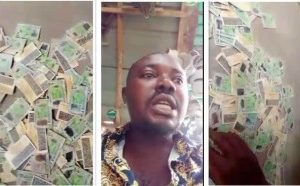 A Nigerian man has cried out on social media after he reportedly saw people throwing out permanent voters card in Lagos.

According to the man, he saw the individuals throw away the PVCs through the window of their vehicle.

He said the incident happened last week Saturday while he was doing his usual morning running exercise.

The man stated that he regretted that he wasn’t with his phone so he could record the face and the plate number of the culprits.