Tunde Onakoya’s Pain In The Leg & The Surgery Option 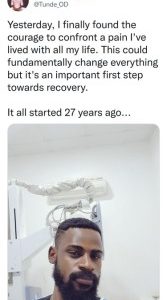 Yesterday, I finally found the courage to confront a pain I’ve lived with all my life. This could fundamentally change everything but it’s an important first step towards recovery.

It all started 27 years ago.

One of the things we don’t talk about is the fear of confronting what may be a worsening health condition. We ignore the pain and tension building up in our bodies because we’re afraid of what we might find. Instead, we opt for blissful ignorance and hope for the best.

I have done this more times than i care to admit…
For 27 years, i have lived with excruciating pain in my right leg.
I wasn’t born this way but something happened that changed the trajectory of my life.

Shortly after I was born in 1994 (i was 9 months old), I got really sick. My mom described it as a chronic case of measles.
This came at a time when my parents struggled to even put food on the table. My Dad’s car spare parts shop in Eko had just been demolished by the government.

There was no money to take me to the hospital and as my condition worsened, my mum had to take me to a local nurse who gave me a bad injection without proper diagnosis. First mistake.

With time I got better but my mum noticed something odd after the first few weeks of recovery.

I had started walking as a baby before I fell sick but after recovery, I stopped walking.
This was strange as I was a very active baby. My parents were worried but weren’t sure what to do anymore as they had spent their entire live savings on paying the nurse for the treatment.

My Dad’s elder sister stepped in and took me to Igbobi hospital where they did an xray and discovered that some damage had been done partly due to measles and the bad injection from the nurse.
I was immediately admitted and booked for surgery. I spent the next 3 months in Igbobi.

I still couldn’t walk properly after igbobi.
My mom told me at the time that she used to hawk sachet water at oshodi underbridge with her twin sister, she would carry me on her back for several hours in the sun before we could eat.

Now you know why oshodi�

With time, I started walking again and had a pretty normal childhood until I was about 10 years old.
This was when i started feeling extreme pain in my right leg, it was really bad. I couldn’t sleep on most nights and my poor mother could only help massage with Robb and aboniki

Things had gone from bad to worse for my parents and going to the hospital wasn’t even an option. We never went to the hospital in my entire childhood/ teenage years. It didn’t matter how sick we were, it was always local herbs.

This is the reality for most families in Nigeria.

The pain got worse because no one paid attention to what was wrong. I had to find a way to live with it.
I have lived with this pain ever since then and I have come to embrace it as a part of my reality.
There were nights when I was crippled with pain and contemplated suicide.

Deep down it hurts because now I know that if my parents were Educated or wealthy, maybe they would have handled things differently. They did what they thought was best because they didn’t know any better.

Time passed and I became a victim of a tragedy I knew nothing about.

January 6th 2018…
On my way back from church, I wanted to cross the road to the other side where I was gonna get a Danfo to my destination. It was a busy road and I could have used the pedestrian bridge but I loved the thrill and rush that came with crossing the highway…

I had timed my surge properly and ran half way when I suddenly felt a sharp crippling pain in my leg,I fell in the middle of the road with cars approaching at dangerous speed. I thought it was the end but thankfully there was a guy just behind me,who pushed me towards the culvert.

He saved my life and helped me get home.
That night, I cried
I picked up my phone and started asking questions on Google. I found the experiences of others and discovered that I had a slight LLD condition caused by trauma and ACN(Avascular Necrosis). I went down the rabbit hole.

This was not a Doctor’s report, it was based on my own research.
PS: Don’t Google your health problems

Everything I read that night made one thing very clear- I didn’t have a lot of years to be strong. With time, there was going to be a serious risk of Arthritis, scoliosis etc.

It was a condition that could be fixed with surgery but it was going to cost 40-80k dollars
At the time, I was owing the woman selling garri on my street 200 naira for garri that I took on credit.
Going to see a Doctor was a pipe dream so I gave up on finding a solution/treatment.

That night fundamentally changed my life.
I was alrrady at the stage in my life where I was frustrated by my living condition and was actively planning to japa. It was also around the same time I was thinking about the chess in slums project.

I had to make a decision knowing fully well that I didn’t have a lot of years to be strong. In my head I thought I had maybe 10 years to do something worthwhile before ending up in a wheel chair.
On that night I decided to pursue the CIS project with all the strength I had left.

On that night I found something to live for- I found purpose.
I wrote down these words- “I’m not sure what the future holds, but for the next 10 years, this frail body will house the greatest spirit humanity will ever know”

My pain become my greatest strength.

I was 23 years old at the time and I made the decision to commit the best years of my youth to using the talent of chess that I had and giving it as a gift to other children like me who will grow up in extreme poverty and become victims of a tragedy they knew nothing about.

It’s been almost 5 years now and a lot has happened�.
I have without a doubt lived my dream of giving children in poverty a fighting chance and an opportunity to find their place in the world again.

I took the the road less traveled and never looked back since then.

While I was in Crossriver for the girl child project, I sprained my knee playing football and the pain came back.
Finally did a Pelvic xray yesterday and yes, it’s really bad.
After 27 years of neglect, there’s a good chance that I’ll need a full hip replacement surgery.

It’s ironical how I’ve taken at least 5 children to get their xray done and paid for their surgery, but never for once thought about actually getting one myself.
I’ve always ignored the pain and lived in constant fear of what I might discover.

I can no longer live in denial.

I’ll probably need to start speaking to a few Orthopedic surgeons and seriously consider my options for surgery next year. Please point me in that direction if you know any good ones (Nigeria and abroad).
My doctor says I need to rest and completely quit high impact activities.

It’s been such a beautiful year with a lot of highs and lows but I’m grateful for the gift of life.
It took a lot of courage to share this because I don’t want anyone to feel sad or pity for me. I hope other people who have the same struggle and pain will be inspired by my story.

This pain point is why I seem almost delusional about my dreams and vision for every child-to build a future includes all of them.
Poverty has dire consequences,and when they say 120 million Nigerians live in Multidimensional poverty, it’s not just some random survey…

These are actual lives and the ones that bear the most brunt of this are the children who become victims of a dysfunctional health and educational system.

Maybe I’ll need to take a gap year to focus on the surgery, write a book, take on more speaking engagements, share my story.
I don’t know. Nothing is certain, but I trust God completely. The God who gives purpose that suits the nature of a man.

He’ll hold my hands through this.