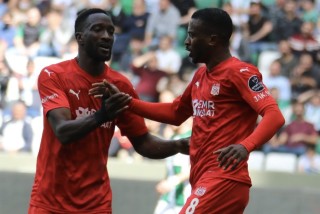 Olanrewaju Kayode was on target for Sivasspor who threw away a 2-0 lead to draw 2-2 at Giresunspor, in the Turkish Super Lig on Saturday.

It was Kayode’s sixth goal in the Turkish elite division and his eight in all competitions this season.

The forward opened scoring in the 39th minute before his Ivorian teammate Max Gradel doubled the lead on 44 minutes.

But Giresunspor fought back to draw the game thanks to a brace from Mehmet Nayir in the 73rd and 79th minutes.

Following the draw Sivasspor remain in 11th place on 41 points and are eight points from fourth place which is the Europa Conference League qualifiers spot.

They are now unbeaten in their last three games, recording two wins and a draw.