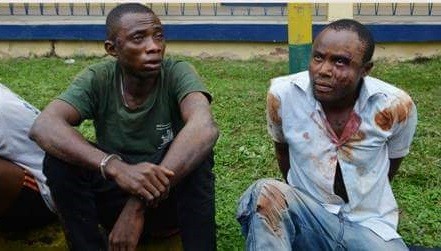 The Imo State Police Command have arrested two suspects in connection with the kidnap of a corpse at a mortuary.

The suspects, Chukwudi Chukwu, 38, of Umuduruegbo Ugirike in Ikeduru LGA and Ibeh Bethel Lazarus, 28, of Umunohu Okwu in Ikeduru LGA , were arrested inside a forest and the corpse recovered from them. Also recovered was one  Suzuki Bus with Reg. No. RLU – 91 – XA and Busimo fleet No. B1727.

“Following the report of the kidnap of a corpse deposited at Jesus Hospital Mortuary Umuiyi Akabo Ikeduru L.G.A on 04/09/2018, operatives of the Anti – Kidnapping Unit of the Command swung into action and through painstaking intelligence led, systematic and well coordinated operation arrested the above named suspects in connection with the crime. Suspects made useful statements to the police confessing to the crime and subsequently led operatives to a forest at Umunjam Mbieri Mbaitoli L.G.A. where the kidnapped corpse was recovered. Investigation is in progress while the kidnapped corpse has been released”  said the State Commissioner of Police,  Dasuki Galadanchi.