UCL: Real Madrid Will Be Tough Opponent For Chelsea –Tuchel 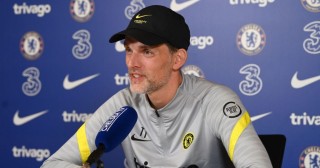 Chelsea manager, Thomas Tuchel has revealed that the team face a difficult test against Real Madrid in the quarter finals of the UEFA Champions League.

The two giants will meet in the quarterfinals.

Tuchel said, “Tough one. The challenge can not be much higher than playing the second leg in the Bernabeu with spectators. It’s a big challenge but there is bit of excitement around this match and fixture. We know what’s coming. It will be an exciting match and a tough challenge.

The Blues could face Manchester City or Atletico Madrid in the semi-final if they overcome Real.

“It’s not important [to avoid English opposition] but it is a European night and it is always nice to play European teams, and not play English teams at this stage, because you play so many times in domestic competition.”

Tuchel is hopeful they’ll be able to play in front of their fans, despite the club’s sanctions.

He said, “It would be a disadvantage [not having any fans]. In general, this game is for the spectators. The game can change so much with spectators, so hopefully we find a solution.

“Everybody at the club and on the board will fight for a chance. I am not sure how big the possibility is.

“These games, any game, is for the spectators. It’s a different game when the crowd is in the stadium.”