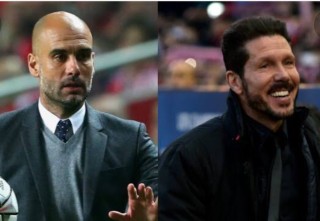 Man City’s quest of winning a Champions League title will come under serious scrutiny when the Citizens host Atletico Madrid in the first leg quarter-finals at the Etihad Stadium on Tuesday.

Last season’s finalists, City, will be keen to go all the way this season, ending Pep Guardiola’s European hoodoo at the Etihad.

While Atletico remains a formidable challenge, it isn’t easy for Guardiola not to have an eye on Sunday’s potential Premier League title-decider against Liverpool.

Both teams have failed to win the Champions League, losing out in the final in recent years. While a win in the tie will not see them scale that final step, it will take them to the last four, strengthening the chances of making another final.

But Guardiola will not be thinking too far ahead as he looks to keep his side on course for their first Champions League title.

Atletico beat Manchester United in the previous round, producing a dogged performance to see off Ralf Rangnick’s side.

However, Guardiola has refused to be critical of the Spanish side’s style of football under Diego Simeone – and instead praised the quality they possess.

“I’m not going to talk one second about these stupid debates I think, after watching Atletico, there is a misconception about the way he plays. It’s more offensive than people could believe.

“He doesn’t want to take risks in the build-up but, after, they have quality and play really well in the final third.”

Guardiola’s side made it past Sporting Lisbon 5-0 on aggregate in the last 16, while the La Liga champions edged past the Red Devils 2-1 to make it to the quarters.

Tuesday’s first leg will mark the first-ever competitive meeting between Man City and Atletico, but Guardiola and Simeone have locked horns as managers three times, with the latter getting the better of his counterpart’s Bayern Munich side in the 2015-16 Champions League.