Ukraine has fought back much harder during the first week than Vladimir Putin expected, or very probably than his generals promised him, it would. But these are still the early stages of what could be a very nasty war. 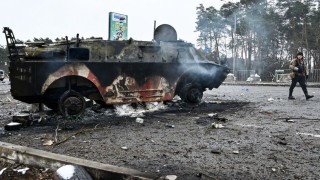 Putin must have hoped that a few days after Russian forces invaded, Kyiv would have fallen. And he surely expected that Western countries, cowed and divided, would have accepted that he had reclaimed a territory that he says is historically part of Russia.

None of this has happened. Ukraine has proved a hard nut to crack, and the reaction of Western countries, particularly Germany, has been far fiercer than he thought. Russia’s economy has already been savagely hit. Putin’s one big friend, China, now seems worried that this Western upsurge of anger might, one day, be turned against China itself – and that serious damage could be done to the Chinese economy. It has already distanced itself from the invasion.

Nato, by contrast, might be strengthened. Finland and Sweden could both end up joining the alliance for their own protection. Putin launched this war in part to stop Ukraine one day joining Nato, but he could find more Nato members on his north-western border.

These are all major setbacks for him. They stem from Putin’s own miscalculations, made while he isolated himself from Covid. He saw only a very few advisers, who we can assume told him what he wanted to hear. Now he will have to reach for new options. He has always refused to back down when he is rebuffed. He will hit back harder – and he has the weapons to do it.

The Ukrainian ambassador to the US claims that Russian forces have already used a thermobaric weapon – what people call a “vacuum bomb”, which sucks in oxygen to generate a high-temperature explosion. Ambassadors at times like this often make extreme claims, but the fact is we have already seen video of Russian thermobaric rocket launchers on their way to Ukraine. Analysts say it is probably only a matter of time before they are used more widely.
Photographs also show that suspected cluster bombs have been used against civilians in Kharkiv. These unleash showers of so-called “bomblets”, which inflict horrific shrapnel wounds on anybody within a wide area. An international convention banned them in 2008, but Russia has not signed it, having claimed it uses cluster bombs in accordance with international humanitarian law. The people of Kharkiv may disagree about that.

Vladimir Putin has never had any qualms about using excessively dangerous weapons. He is thought to have signed off on the use of radioactive polonium to murder the former KGB agent Alexander Litvinenko in London in 2006. He is also likely to have agreed to let Russian military intelligence attack Sergei Skripal, another defector, with the toxic nerve agent Novichok in Salisbury in 2018. Skripal survived, although one woman, Dawn Sturgess, died after being exposed to the deadly substance.

The danger to entirely innocent civilians doesn’t seem to have worried him. These were planned as targeted assassinations, not the kind of widespread attacks that we are starting to see in Ukraine, but the principle is the same – civilian lives don’t matter if Russia’s wider interests are at stake.
Would he be prepared to use nuclear weapons if he doesn’t get his way over Ukraine? That must be a possibility – but most analysts think we’re not close to that stage yet. It is true that Putin has said darkly that if anyone considers interfering in Ukraine from the outside, they will face consequences more serious than any in their history. And he’s often repeated the thought that if world doesn’t include Russia, why should it continue to exist? All the same, Nato would have to miscalculate very badly for a nuclear confrontation to build up.

History may repeat itself – in 1939, Stalin attacked Finland, expecting it to crumble within days. Instead it fought back, and the Russian army received a bloody nose. It was almost a year before the so-called Winter War was over. It ended with Finland losing territory but remaining an independent country. There’s at least the possibility that the war in Ukraine will finish in a similar way.

We are only at the start of things, and just because Ukraine has held out so far, that doesn’t mean it can resist the full might of Russia for long. But the first round has unquestionably gone well, and the West’s response has been far more robust than most people expected. Chief among them, Vladimir Putin.