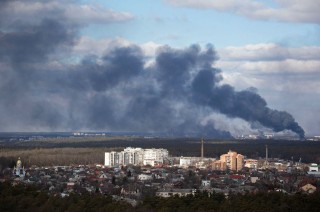 Oksana Markarova, Ukraine’s ambassador to the United States, told reporters after meeting with members of the U.S. Congress that Russia had used a thermobaric weapon, known as a vacuum bomb, in its invasion of her country.

“They used the vacuum bomb today,” Markarova said after a meeting with lawmakers. “…The devastation that Russia is trying to inflict on Ukraine is large.”

A vacuum bomb, or thermobaric weapon, sucks in oxygen from the surrounding air to generate a high-temperature explosion, typically producing a blast wave of a significantly longer duration than that of a conventional explosive and is capable of vaporizing human bodies.

There has been no official confirmation that thermobaric weapons have been used in the conflict in Ukraine. CNN reported that one of its teams had spotted a Russian thermobaric multiple rocket launcher near the Ukrainian border early on Saturday afternoon.

White House Press Secretary Jen Psaki said she had seen reports but did not have confirmation that Russia had used such weapons. “If that were true, it would potentially be a war crime,” she told a press briefing, noting that there are international organizations that would assess that and President Joe Biden’s administration “would look to be a part of that conversation.”

The Russian embassy in Washington did not respond to requests for comment.

Markarova said Ukraine was working actively with the Biden administration and Congress to obtain more weapons and tougher sanctions.

One lawmaker who attended the meeting, Democratic Representative Brad Sherman, said the Ukrainians had asked for a U.S.-enforced no-fly zone over Ukraine but that he felt that was too dangerous because it could provoke conflict with Russia.