Ukrainian City Of Mariupol Searches for Survivors Amid Rubble Of Theatre

Ukrainian City Of Mariupol Searches for Survivors Amid Rubble Of Theatre 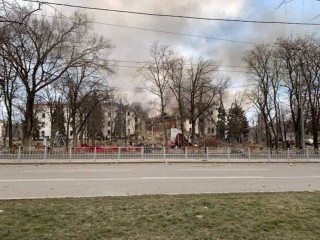 Rescue workers were searching for survivors in the rubble of a theatre in the besieged city of Mariupol on Thursday, after Ukraine said a powerful Russian air strike hit the building where hundreds of people had been sheltering from the war.

The port city is encircled by Russian forces and has seen fierce bombardment. A statement from the city council said that about 30,000 residents had managed to escape so far, but more than 350,000 remained stuck there.

“The heart is breaking from what Russia does to our people, our Mariupol, and our Donetsk region,” Ukrainian President Volodymyr Zelenskiy said in a late night address on Wednesday, after referring to the theatre attack.

The city council said hundreds of people, mostly women, children and the elderly, had been hiding in the theatre and a nearby swimming pool building because of heavy shelling.

“Information about the victims is still being clarified,” it said.

Earlier, Petro Andrushchenko, an adviser to the city’s mayor, said some people survived the blast and the bomb shelter had held. Emergency workers were looking for them in the rubble.

Russia has denied bombing the theatre.

Russian foreign ministry spokeswoman Maria Zakharova said on Thursday that the allegation that Russia had bombed the theatre was a “lie”, and repeated Kremlin denials that Russian forces have targeted civilians since the Feb. 24 invasion of Ukraine.

“Russia’s armed forces don’t bomb towns and cities,” she told in a briefing.

HUNGER IN A BUNKER

Satellite images of the theatre taken earlier this week before it was struck show a large structure with a red roof and the Russian word for “children” painted in large white letters on the tarmac at the front and back.

Mariupol council said the physical damage to the city had been “enormous”. It estimated that around 80% of the city’s homes had been destroyed, of which almost 30% was beyond repair.

On the outskirts of town, Reuters reporters saw people leaving on foot and in cars, some pushing their belongings in shopping carts. In the background there were badly burned and bombed apartment blocks, some still smouldering.

Oksana Zalavska, 42, fled Mariupol two days ago and is now in Zaporizhzhia. The mother of a three-year-old boy and 12-year-old girl had been staying in an overcrowded bomb shelter where adults ate one tiny meal a day as rations were low.

“Now I know everything about starvation in 2022,” she told Reuters.

The International Committee of the Red Cross called on the warring parties on Thursday to let people leave Mariupol safely and to allow aid in.

Up to 40 ICRC staff and their families had to flee the port along with other civilians on Wednesday, because they had “no operational capacity any more,” the organisation’s head Peter Maurer told a news conference.

Zalavska and her family tried to escape Mariupol once before, on March 6, when they heard a safe corridor had opened. But she said Russian shelling continued and so they rushed back to their shelter. On the second attempt they pushed on.

“To tell the truth we were ready to die,” she said. “We could die in a bomb shelter or we could die trying to get to freedom. We did not have a choice.”