Ukrainian Pilots Arrive In Poland To Pick Up Donated Fighter Jets
Fighter jets, planes have been donated to Ukraine to help the country fight against Russia.

It has now been revealed that Ukrainain pilots have arrived Poland to take control of the fighter planes, a Ukrainian government official told POLITICO. 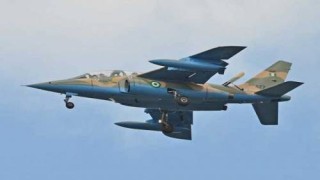 The potential transfer of older Russian-made planes to be used in combat against Russian forces could be the most significant moment yet in a wave of promised arms transfers over the past 24 hours that includes thousands of anti-armor rockets, machine guns, artillery and other equipment.

It’s not clear just yet what countries are donating the jets, but European Union security chief Josep Borrell pledged over the weekend that the EU would fund the transfer the fighter planes from multiple countries.

Borrell walked that back slightly on Monday, acknowledging that any transfers wouldn’t come from the EU itself, but would instead be donated “bilaterally” by individual EU countries.

Representatives from the Polish and Slovakian governments did not immediately respond to a request for comment, while Bulgarian Prime Minister Kiril Petkov on Monday said he had rejected the request.

Poland and Slovakia still fly Russian-made planes similar to those used by the Ukrainian air force, meaning the pilots would not need much training if the planes were transferred.

In a move likely aimed at increasing pressure on Europe to act, the Ukrainian parliament on Monday tweeted that Europe was sending 70 fighter planes to Ukraine, including 28 MiG-29s from Poland, 12 from Slovakia and 16 from Bulgaria, along with 14 Su-25s from Bulgaria.

The fighter plane drama came on top of a flurry of announcements over the weekend that saw European leaders promise a flood of new weaponry for the Ukrainian military to assist in fighting off invading Russian troops, an overt and very public acknowledgment of Europe’s newfound will to inflict pain on the Kremlin for its military adventurism.

With the air corridors to Kyiv closed by Russian anti-aircraft weapons and fighter jets, U.S. and European powers have started pushing weapons into the country by road.

Poland, Estonia and Latvia were some of the first to act, sending ammunition, Javelin anti-armor weapons, fuel and medical supplies to the Ukraine border for hand-off to Ukrainian forces.

Canadian Foreign Affairs Minister Mélanie Joly is heading to Poland Tuesday to coordinate the shipment of 100 Carl Gustaf anti-armor rocket launchers, along with 2,000 munitions and other aid.

One of the biggest surprises in recent European political history came Saturday, when German Chancellor Olaf Scholz announced he was sending 1,000 anti-tank weapons and 500 Stinger missiles to Ukraine, a reversal of the German post-war policy of barring the transfer of arms to warring parties. He also pledged an immediate $100 billion infusion into the German military.

President Joe Biden also ordered the release of up to $350 million worth of weapons from U.S. stocks to Ukraine on Friday. Speaking with reporters at the Pentagon Monday, a senior U.S. Defense Department official declined to go into detail about what will be included, but said “there will be capabilities in there to help them with both their ground defensive capabilities as well as airborne defensive capabilities.”