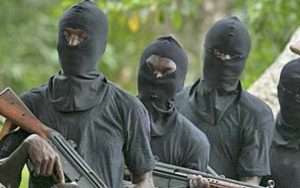 There was panic in Umuoma Nekede community in Owerri West Local Government Area of Imo State as gunmen kidnapped a Lagos-based businessman.

The victim, identified as Umunna Onyeokwu from Umuikea, Umuoma, was inside his car parked near the compound when three armed men confronted and whisked him away.

An indigene of the community, who spoke to DAILY POST on Tuesday, said the community had been thrown into confusion following the abduction.

He said the incident which happened on Sunday evening at about 7 pm is now causing panic in the community as the man had just returned from Lagos.

The community source who pleaded anonymity, said the victim while returning from where he had gone to play football at the Central Primary School, did not know that some men were trailing him behind.

“So when he parked his car near his house and was trying to come out of the car, the men moved swiftly towards him and pointed gun at him ordering him to get back to his car. Immediately they forced him into their car and drove off,” he said.

When a DAILY POST correspondent visited Onyeokwu’s compound on Tuesday, the family members were too traumatized to talk.

Our correspondent gathered that the kidnappers have not contacted the family.

According to a source close to the family, “we have not made contact with the abductors. We are pleading for his release.

“We are dumbfounded because such a thing has not happened in our community before. We have not heard or seen abductors coming into a compound to kidnap people before.”

However, when contacted, the Police Public Relations Officer (PPRO), Michael Abattam highlighted that the Divisional Police Command is yet to brief them in respect of the ugly incident and promised to brief the press with further details.