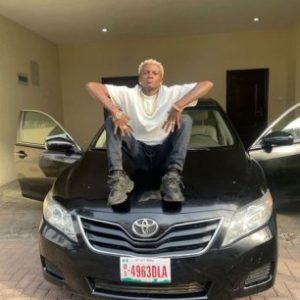 An aide to fast-rising singer, Portable reportedly crushed a commercial motorcyclist to death in Ogun State.

The singer was said to have sent his driver on an errand on Tuesday June 21, when the incident occurred.

The victim of the accident which occurred at Iyana Ilogbo along Lagos-Abeokuta expressway, reportedly died while he was being rushed to the hospital.

The naming ceremony of the singer’s baby also took place on Tuesday. Police Spokesman in the state, Abimbola Oyeyemi, confirmed the incident but said it was a case of accident.

“The accident occurred at Ilogbo area in Ogun state where one of Portable’s aides hit a motorcyclist and the man did not survive as he died on his way to the hospital.

The police had on Monday June 20, ordered Portable to immediately report himself at the nearest police post or be arrested. This followed a case of an alleged assault on his former Disc Jockey, simply identified as DJ Chicken.