US “Doomsday” Plane Sent With Biden To Europe (Pics)

US “Doomsday” Plane Sent With Biden To Europe (Pics) 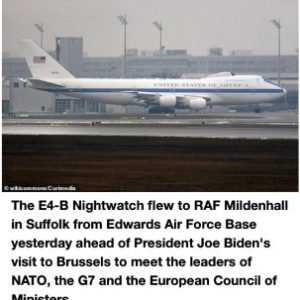 The US Air Force has sent it’s ‘Doomsday’ plane to Europe as part of a fleet of jets to support President Joe Biden’s four-day mission to bolster unity against the Russian invasion of Ukraine.

The E4-B Nightwatch is designed to be a command and control centre in the event of nuclear war.

The US keeps at least one of the fleet of four on permanent standby for immediate launch in the event of a nuclear conflict.

Earlier this week, a senior Kremlin official warned that Moscow reserved the right to use nuclear weapons if there was an ‘existential threat’ against the country.

One of the jets – which are based on a Boeing 747 and first entered service in the 1980s – flew to RAF Mildenhall in Suffolk yesterday, having refuelled midair while crossing the Atlantic.

The aircraft are designed to survive the electromagnetic pulse caused by a nuclear detonation and maintain contact with US military units across the globe to respond to a hostile attack.

The jets, which have been upgraded since their first deployment are able to pass orders from the president to US nuclear submarines and the country’s ICBM silos.

As a result, they have been described as the ‘Flying Pentagon’.

The doomsday jets look similar to the presidential aircraft, commonly known as Air Force One – although the E4-B – contains highly specialised monitoring and communications equipment.

Earlier this week, Vladimir Putin’s spokesman Dmitry Peskov told CNN that nuclear weapons could be used if there was ‘an existential threat for our country’.

NATO partners have agreed to supply Ukraine with equipment to protect against possible chemical attack.

General Secretary Jens Stoltenberg told reporters in Brussels: ‘This could include detection equipment, protection and medical support, as well as training for decontamination and crisis management.’

Biden is to visit Poland on Friday, where the energy and refugee issues are expected to be at the center of talks with President Andrzej Duda.

Four new NATO battlegroups, which usually number between 1,000-1,500 troops, are being set up in Hungary, Slovakia, Romania and Bulgaria.

Earlier today, NATO promised Kyiv new military support and assigned more troops to the alliance’s eastern flank while London and Washington imposed fresh sanctions on Moscow during a trio of summits on Thursday aimed at showing Western unity against Russia’s war in Ukraine.

NATO leaders meeting in Brussels agreed to help Ukraine protect itself against any chemical, biological or nuclear attacks, and a U.S. official said Washington and allies were also working to provide Kyiv with anti-ship missiles.