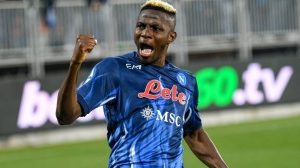 In a bid to end and discourage racism, the league’s disciplinary commission has fined Verona 12,000 euros ($12,200) for insulting chants directed at e Napoli striker, Victor Osimhen.

Recall that the Super Eagle star suffered racist abuse from the stands during a Serie A match at Hellas Verona at the weekend.

The home fans were not happy seeing the Nigerian striker on their pitch and chants were made to slow his game down in the duel.

Osimhen did not allow the chants to weigh him down in the tie as he even made a celebration to troll Verona fans.